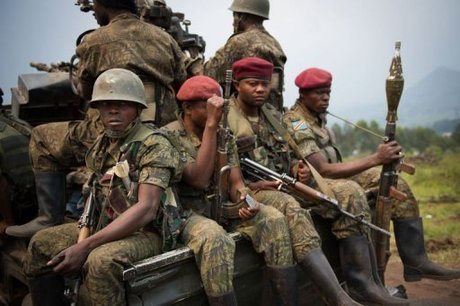 Rwanda has refused to take custody of 24 rebels who surrendered to U.N. peacekeepers in DR Congo, which accuses Kigali of backing an army mutiny in its restive east, a U.N. spokesman said Saturday.

The 24 rebels, who say they are Rwandan nationals, turned themselves in to the U.N.'s peacekeeping mission in DR Congo in May after deserting from the M23, a group formed by Congolese army mutineers that has been engaged in running battles with the regular army in the eastern region of Kivu.

The rebels said at the time of their surrender that they had been recruited in Rwanda and sent to DR Congo to join the M23, whose rebellion has caused a spike in tensions between the two neighboring countries.

U.N. peacekeepers took the surrendered rebels to the border Saturday to hand them over to Rwandan authorities.

But the Rwandans said "they could not take people from the M23," a U.N. peacekeeping spokesman in the eastern Congolese city of Goma told Agence France Presse.

The spokesman said Rwanda did however take custody of seven rebels from the Democratic Forces for the Liberation of Rwanda (FDLR), a Rwandan Hutu militia group based in eastern DR Congo that Kigali says included members who participated in Rwanda's 1994 genocide.

The May surrender of the 24 rebels was the first indication that the M23 had received support from Rwanda.

A panel of U.N. sanctions experts assigned to investigate the link reported in June that there was "overwhelming evidence" that senior Rwandan army officers had in fact been backing the rebels with fighters, weapons and supplies.

But Rwanda has denied involvement and in turn accuses the DR Congo of renewing cooperation with the FDLR, which opposes Rwandan President Paul Kagame.

The M23 mutineers are Tutsi ex-rebels from the Rwanda-backed National Congress for the Defense of the People (CNDP).

They were integrated into the regular army in 2009 as part of a peace deal that followed their failed 2008 offensive on Goma.

But they mutinied in April, demanding better pay and the full implementation of the March 23, 2009 peace deal for which they are named.