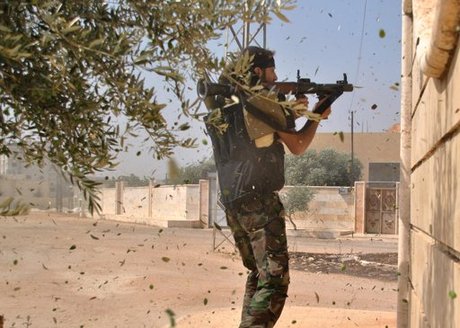 Syrian rebels declared the battle to "liberate" Damascus has begun as heavy fighting raged across the capital on Tuesday and Russia said it will do everything to support a tattered peace plan.

The proclamation by the Free Syrian Army came as U.N.-Arab League envoy Kofi Annan said the 16-month-old crisis, which is increasingly being described as a civil war, was at a "critical time."

The spokesman for the FSA's Joint Command, Colonel Kassem Saadeddine, said in Homs that "victory is nigh" and that the fighting would not stop until the whole of the capital has been conquered.

"We have transferred the battle from Damascus province to the capital," said Saadeddine. "We have a clear plan to control the whole of Damascus. We only have light weapons, but it's enough."

"Expect surprises," he added, without elaborating.

Fighting between Assad's forces and the Free Syrian Army has raged in Damascus since Sunday, and the FSA announced on Monday the launch of a full-scale offensive dubbed "the Damascus volcano and earthquakes of Syria."

An activist in the capital told Agence France Presse that FSA fighters had blocked an attempt by the army to storm Qaboon.

"The army tried to raid the neighborhood yesterday but the FSA stopped them," said the activist, who calls himself Omar.

Backed by tanks and low-flying helicopter gunships, the army randomly pounded the neighborhood with mortars and heavy machinegun fire, he said.

An activist who said he was in al-Midan said via Skype that the army was shelling the neighborhood "hysterically."

"The collapsing regime has gone mad," said the man, who identified himself as Abu Musab.

"The army has tried to storm the district, but the Free Syrian Army has stopped them. So they have intensified their shelling. They are shelling everything," he said, adding Ghazwat Badr mosque had been destroyed.

Witnesses also reported heavy machinegun fire in Sabaa Bahrat Square in the heart of Damascus, as well as in Baghdad Street, a main road nearby.

The regime vowed on Monday not to surrender the capital.

"You will never get Damascus," read the headline in Al-Watan newspaper, which is close to the regime.

In that context, the Israeli army's intelligence chief said Assad has moved troops from the Golan Heights next to Israel toward Damascus and other internal conflict zones.

"Assad has removed many of his forces that were in the Golan Heights to the areas of (internal) conflict," Major General Aviv Kochavi told MPs.

"He's not afraid of Israel at this point, but mainly wants to augment his forces around Damascus," Kochavi said, while saying the "probability of a conflict between Israel and Syria as a last resort for Assad is low."

He also said that "radical Islam" was gaining ground and that Syria was undergoing a process of "Iraqization," with militant and tribal factions controlling different areas.

In Moscow, Russian President Vladimir Putin told visiting Annan he would "do everything" to support the former U.N. chief's plan to end the conflict.

"We will do everything that depends on us to support your efforts," Putin told Annan at the start of their Kremlin meeting.

Annan told Putin "the Syrian crisis is at a critical time" before the meeting was closed to the media.

While Annan is in Moscow, U.N. chief Ban Ki-moon is due in Beijing on Tuesday, also on a mission to get support for tougher action on Syria.

Russia and China have twice blocked resolutions against Syria at the Security Council, which is divided over Western calls to pile new sanctions on Damascus.

The Observatory said 149 people were killed across Syria on Monday -- 82 civilians, 26 rebels and 41 soldiers -- adding to its toll of more than 17,000 people dead since the uprising began.

In Geneva, the International Committee of the Red Cross said Syria is in a state of all-out civil war and that all sides must respect humanitarian law or risk war crimes prosecutions.

And in other developments, Iraq urged its citizens in Syria, mainly refugees from their country's own violence, to return home because of "increasing attacks."

The call comes a day after the bodies of two Iraqi men identified as journalists, who were stabbed and shot dead in Damascus, were handed over at a border post with Syria.

Nawaf Fares, who became the most prominent figure to abandon Assad when he defected as Syria's ambassador to Iraqi, warned the beleaguered president will use chemical weapons against opposition forces and may have already deployed them.

Fares insisted Assad's days were numbered but warned he would be prepared "to eradicate the entire Syrian people" to remain in power.

When asked by the BBC whether that would mean the use of chemical weapons, Fares said: "I am convinced that if Bashar Assad's regime is further cornered by the people, he would use such weapons."

The latest violence comes as diplomatic pressure builds ahead of a key Security Council vote to decide if the 300-strong U.N. Supervision Mission in Syria will be renewed on Friday.

The unarmed observers are tasked with overseeing implementation of a six-point peace plan brokered by Annan, which has been flouted daily since mid-April when it was to have taken effect.

Always wondered when he will use chemical weapons. Saddam did it. Bashar is not a saint.

Freedom is moving closer and closer to the epi-center of oppression [ Damascus ], freedom will never be denied.

I wonder why people like you just can't see what happening, the plot of the new middle-east was written years ago, no more christians in iraq, in lebanon "mouhamachin", in egypt from bad to worse... the world is heading to a christian west vs muslim east that keeps fighting, so some intelligent people (we all know who) rules... it's obvious how mass media brainwashed all of you people!

The days of the Assad Regime are now numbered. In 2005, Walid Jumblatt was very correct to say that the Cedar Revolution in Lebanon started on March 14 would not be successful unless it went all the way from Beirut to Damascus and the regime, not just of Hrawi, but of his sponsor, Bashar al Assad, came to an end. The Syrian people, the FSA are finishing the work that was commenced in Martyr's Square in Beirut on March 14, 2005.