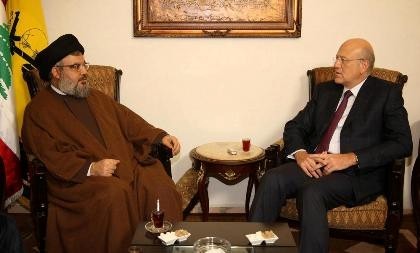 Al-Akhbar and As Safir dailies said that the two men met on Tuesday night to discuss the obstacles facing the formation of the new cabinet.

However, Miqati’s sources denied to Free Lebanon radio that a meeting took place recently between the premier-designate and Nasrallah, saying the two men held talks on February 24.

Nasrallah reiterated to Miqati that he should take into consideration the demands of Free Patriotic Movement leader Michel Aoun and the representation of the Sunni opposition by former Premier Omar Karami’s son, Faisal, al-Akhbar said.

Aoun has been insisting on getting the interior ministry portfolio and the lion’s share of the Christian representation in the cabinet. As for Hizbullah, it is pressuring Miqati into giving a cabinet seat to Faisal Karami.

Nasrallah’s assistant, Hussein Khalil, and the advisor of Speaker Nabih Berri, MP Ali Hassan Khalil, have already informed the prime minister-designate about their demand for Karami to be granted a seat.

However, according to al-Akhbar, Miqati rejected to grant Aoun a large share and did not express readiness to include Karami in his government.

Instead the premier-designate told Nasrallah that he was mulling to propose a 24-member draft cabinet lineup after reports that he had agreed to form a government made up of 30 ministers.

As Safir quoted Arslan as saying that he “should get a respectable portfolio” or else he won’t take part in the cabinet and would not give his vote of confidence to Miqati’s government in parliament.