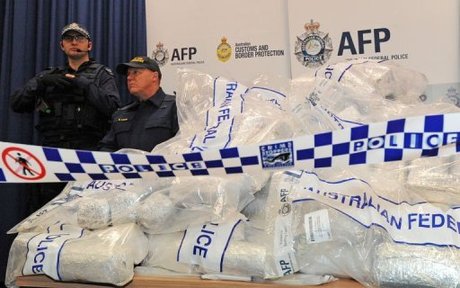 Australian police have seized half a billion dollars' worth of crystal methamphetamine and heroin after smashing a Hong Kong-linked international drugs syndicate, they said Tuesday.

Police raided addresses in Sydney on Monday, arresting seven people after allegedly finding 306 kilograms of crystal methamphetamine -- known as 'ice' -- and 252 kilograms of heroin worth a total of Aus$500 million (U.S. $525 million).

Four of those detained were Hong Kong nationals and the other three Australian residents.

It was the largest haul of ice in Australian history and the third-biggest heroin bust, and was the culmination of a protracted operation following a tip-off from the U.S. Drug Enforcement Administration.

"This was an 11-month investigation where we've had tight control over a number of people who we suspected of being involved in illicit narcotic importations," said deputy police commissioner Andrew Colvin.

"This has prevented half a billion dollars of drugs reaching Australian streets."

"This is more heroin and more amphetamine than we often seize in an entire year," he said.

The drugs were allegedly stashed in terracotta pots shipped to Australia from an undisclosed country and tracked to a warehouse in inner-city Sydney.

Those arrested, aged between 29 and 61, appeared in court Tuesday charged with various drug importation and distribution offences and were remanded in custody until October 17.