Bali Profits From Business of Soul-Searching 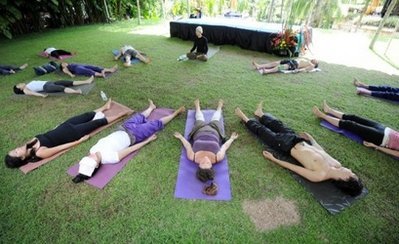 Being a Hindu yogi once meant renouncing worldly pleasures for a life of solitary meditation, wandering the jungle in search of union with god.

Today, new-age yogis wander the globe from one retreat to another, stay in luxury hotels and preach to the converted masses through a headset microphone.

At the Bali Spirit Festival last week, yogis sold their take on life -- along with complementary DVDs -- as visitors from as far afield as the United States, Australia and Europe lapped up expensive yoga apparel, mats and mala beads. Just stepping through the festival gates cost $100 a day.

"I bought a gold pass for $500 and I find it hard to get $100 worth of yoga a day. At the same time, all the classes have been amazing, so in the end, I’m happy to have paid that," said Australian Jean Cameron, 39.

A 2008 study published by the Yoga Journal valued the yoga industry in the United States alone at almost $6 billion a year, with some more recent estimates for the global industry rising to $18 billion.

Bali is an obvious hub for yoga fanatics. The Balinese are Hindu, the Indonesian island is rich with natural beauty and the government supports spiritual tourism including temple tours and visits to traditional healers.

Demand for such experiences spiked recently with the publication of Elizabeth Gilbert's best-selling memoir "Eat, Pray, Love" -- a romantic journey of self-discovery featuring a mystical encounter with a Balinese soothsayer.

Uma Inder, a Hatha yoga teacher, has witnessed the radical transformation of yoga in Bali. She moved from England to the island 22 years ago, spending her first seven years practising yoga alone in the jungle.

"In those days you didn’t talk about yoga and no one really knew about it. Nowadays, it’s a social buzz. It’s now talked about, it’s paraded and it’s very much about entertainment," Inder said.

Festival organizer Meghan Pappenheim makes no apologies for the commerciality of the event, and sees it as a positive way to draw more people to yoga.

"I’m the first to admit I’m an entrepreneur, I’m a capitalist. This event has a target market, and those are the people with the money who can go home and make a difference," she said.

"My philosophy is that you make money and then you give it away. You make enough to buy a phone and a nice car, and you give the rest away."

Only four years old, the festival itself is yet to turn a profit. But Pappenheim and her Balinese husband, Kadek Gunarta, say they have used the yoga boom to raise $36,000 for charity through various events.

The festival has a sponsor, Fiesta condoms, which donated $25,000 for an HIV/AIDS outreach programme for Balinese high school students.

So far, Pappenheim and her husband have funded the festival from money they make from a small empire of businesses, which include a yoga center, an art gallery, an Eco-friendly furniture studio and a cafe.

Pappenheim is optimistic that the festival too will become profitable as attendance numbers double annually. This year, she estimates 4,000 people participated.