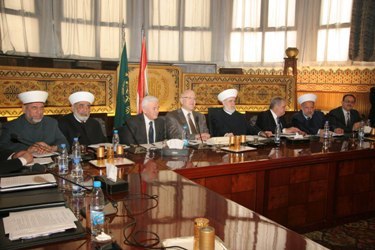 Prime Minister-designate Najib Miqati informed on Saturday the Higher Islamic Council that he is facing obstacles in the government formation process, reported the daily An Nahar on Sunday.

He added that he had told it that “I have taken it upon myself to serve my country and its stability.”

In addition, he presented President Michel Suleiman with a number of possible structures for a potential government in order that the most appropriate one be chosen.

Miqati said Saturday that progress was made on consultations aimed at forming the new government but stressed that he hasn’t yet reached the cabinet formation stage.

“The atmosphere is positive … I will continue to work on overcoming difficulties,” Miqati said during a meeting of the Higher Islamic Council under Grand Mufti Mohammad Rashid Qabbani at Dar al-Fatwa.

“We have made progress in our contacts and efforts but this does not mean that we are close to forming” the cabinet, he said.

While expressing optimism that his latest meetings would speed up the efforts to form the government, Miqati said all parties are aware of their responsibilities that force them to cooperate in forming a productive cabinet that satisfies the Lebanese.