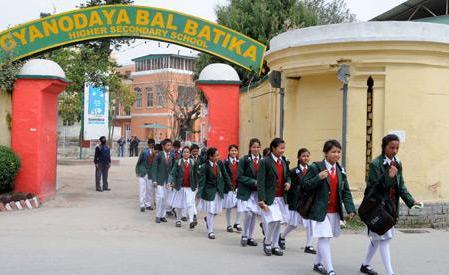 Nepal said on Monday it was banning secondary schools from using names like "Oxbridge", "White House" and "NASA" over fears that the education system is losing its Nepali culture.

The announcement follows a series of protests by student and youth groups -- sometimes violent -- outside schools across the country which have chosen foreign names.

"We have informed the schools to change their name to Nepali. This is clearly written in the laws but several schools were found violating them," education ministry spokesman Janardan Nepal told Agence France Presse.

"They will be given enough time to change the names. But it should not take long," Nepal said, without specifying a deadline.

Nepal depends on foreign governments and aid agencies for around 25 percent of its 65-billion-rupee ($715 million) education budget and cash-strapped schools often try to attract funding and pupils with "prestigious" western names.

An estimated 250 secondary schools in Kathmandu are named after European and U.S. historical figures, institutions and places, such as "Einstein Academy" and "Pentagon College."

Last month the United Nations voiced "deep concern" over escalating violence against schools in Nepal by militants it said were endangering children's lives and jeopardizing their right to education.

Local media have blamed student wings of various political factions for destroying computers in a Kathmandu college and torching school buses in the capital, the southern district of Chitwan and the eastern city of Dharan.