Six Killed in Fresh Attack on Abidjan Army Base 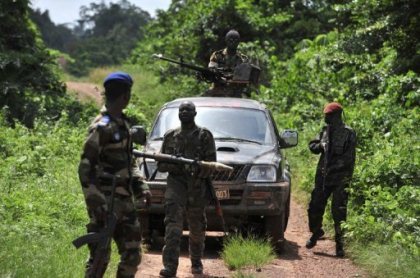 A raid on an army base in Abidjan left at least six dead Monday, in the latest of a string of attacks targeting the military in the Ivory Coast economic capital.

President Alassane Ouattara has struggled to stabilize a country still awash with weapons and demobbed fighters, more than a year after the end of a deadly post-election crisis.

A firefight broke out at dawn around the Akouedo military camp in Abidjan's Cocody neighborhood, according to residents and officials who were unable to identify the attackers.

"Several armed men attacked the Akouedo camp, breaking in before heading for the powder magazine," an official in Ivory Coast's military command said.

"The men posted in the camp had to regroup before retaliating. The attackers fled towards Bingerville," a nearby town, he said,

Four bodies could be seen strewn on the blood-splattered floor of a building at the entrance of the Akeoudo military camp and two others at a sentry post and another gate, an AFP correspondent reported.

All the victims were wearing military fatigues.

A military source speaking on condition of anonymity said several soldiers were also wounded in the attack.

"Army medics are attending to the wounded," the officer told AFP.

The storming of the Akouedo base came after gunmen killed five soldiers in twin attacks on a police station and an army post in Abidjan's Yopougon district in the early hours of Sunday.

Defense Minister Paul Koffi Koffi told AFP that Sunday's attack was an apparent bid to free people who had been arrested the previous day but did not rule out involvement from renegade soldiers.

"We'll see if the investigation leads us to members of the military, of the police or civilians," he said.

Tensions continue to spark violence in Ivory Coast despite the end of five months of fighting which followed the December 2010 polls, when ex-president Laurent Gbagbo refused to concede defeat at the ballot box to Ouattara.

Ouattara's government has been trying to disarm and reintegrate fighters involved in both sides of the conflict into the Ivorian army to reduce the violence.

Gbagbo is currently facing charges of crimes against humanity at the International Criminal Court in The Hague.

Security officials had also reported an exchange of fire near the border with Ghana on Sunday.

The former French colony will mark 52 years of independence on Tuesday with celebrations led by Ouattara that will include the traditional military parade in Abidjan.