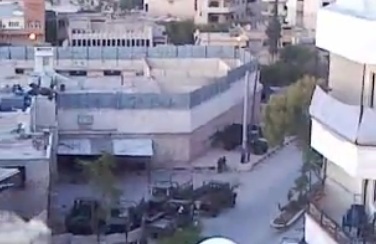 Anti-regime gunmen killed 16 civilians, mostly Alawites and Christians, in an attack Tuesday on a housing compound for power company employees near Homs, the Syrian Observatory for Human Rights said.

Abdel Rahman said the Jandar Power Station employs Syrians, as well as foreigners, mainly from Iran and Japan, who live with their families at the compound in Jandar village, about 30 kilometers (19 miles) from the central Syrian city of Homs.

"The village and its surrounding areas are Sunni," he added.

The majority of Syria's population is Sunni Muslim, while the ruling clan of President Bashar Assad belong to the Alawite sect, an offshoot of Shiite Islam.

Rights watchdogs have expressed fears that the Syrian uprising -- in which more than 21,000 people have been killed since March 2011 -- is becoming increasingly sectarian.

No comments here about the future democratic Syria. This is the tsunami, which will be heading toward Lebanon soon.

You are the only idiot, my nigger.

Jc American. Go back to the HA slums you come from. America will probably deport you soon moron. Start packing.