Report: Hizbullah Does Not Adopt Raad’s Comment on Samaha Arrest 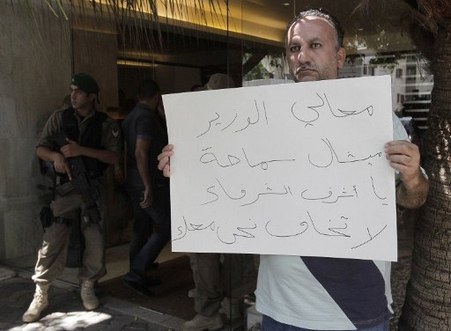 Hizbullah has informed Lebanese authorities that it hasn’t adopted the stance of MP Mohammed Raad on the arrest of former Minister Michel Samaha, informed sources told An Nahar daily on Saturday.

The sources said the Hizbullah leadership told the concerned officials that Raad’s pledge not to remain silent to Samaha’s arrest did not represent the stance of the Shiite party.

Except for Raad’s announcement, none of the other major parties that make up the Hizbullah-led March 8 alliance have announced support for the former MP and information minister.

Samaha was arrested on Thursday morning at his Jwar al-Khenshara home in the North Metn by the Internal Security Forces Intelligence Branch for reportedly transporting explosives in his vehicle from Syria to carry out bombing attacks mainly in the North.

He was referred to a military tribunal on Saturday.

smart move on the part of hizbushaitan, but that does not mean anything, unless they support filing a law suit against bashar assad with the international court.
the article is wrong in stating the other components of m8 announced their support for samaha! fpm through nicola have voiced their support as well as attacked the ISF.
by the way why is this guy (nicola) not sued for attacking the ISF like they are doing for merhabi?

to all m14 commentators,
lately someone pointed out to me that trying to discuss with m8 guys is useless, and I agree with him, as all that will happen is insults and more insults.
in the spirit of one unified Lebanon, I urge all m14 not to reply to comments from m8 at any cost.
if they do not want to realize what their policies and actions are doing to our country, we should not do the same.
I hope you will all comply, even when they attack us directly.

i bet some1 is gonna take out smeha halla2 cuz he probably has some crazy information abt hizballa....bass could it be he took part in RAFIK HARIRIS MURDER. this terrorist should live a long life of pain and misery IN JAIL

agreed, we should not be debating Satan's soldiers...sticks and stones may break me but words will never hurt me.

Even though I don't like HA's weapons, I dont think they are involved in all those assassination attempts. I suspect greatly the syrian offshoots, SSNP, Smaha, other junk like that who want to destabilize lebanon. HA is part of the lebanese fabric and has a lot invested in lebanon. It does not wish to destabilize and kill. It only wants to keep its weapons and remain top dog. So our problem is bachar, not hassan.

HA is the hand of the syrian regime!

No. HA is allied with the syrian regime. It is not their hand. SSNP, Jibril, some palestinian factions, smaha are the hand. HA is only ALLIED to syrian regime. HA cares only about reinforcing chiite lebanese position. And his interests happen to be concordant with syrian regime...

Fallout, that's what this is, fallout. If Hezbollah can't get on the same page with its spokesperson Raad, it sure looks like these guys are falling into the same sort of disarray that their Ammo Bashar is falling into in Aleppo.

The slide down the slope has started. The cliffs loom.

Hezb Iran knows that Bashar is going so they are trying to look like the good guys.

Naa...I thinl they're too full of hatred to even try to compromise...

All aboard the Failboat!

The filthy militia is starting to crumble