Qabbani to al-Rahi: All Lebanese Should Beware of Divisions 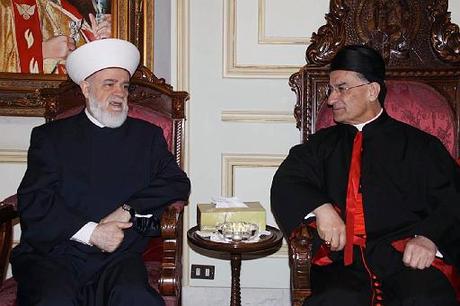 Grand Mufti Sheikh Mohammed Rashid Qabbani hoped on Monday that the Lebanese are aware of the impending dangers of divisions among them.

Qabbani hoped that all Lebanese would become aware of the looming dangers resulting from their divisions because division is the cause of strife, the National News Agency said.

It said the Mufti made his remark to Maronite Patriarch Beshara al-Rahi who telephoned him to extend his Eid al-Fitr greetings.

NNA quoted al-Rahi as hoping that the Eid would bring safety and security to the country.

The Mufti said in his Eid sermon at Mohammed al-Amin mosque on Sunday that all Lebanese should be blamed for the country’s plight.

I think all lebanese should also be aware of multiplication, additions, substratctions all math is important.

Al Rahi to Qabbani: but not long ago you were a filthy Sunni Kabbini! What happened?
Qabbani to Al Rahi: anyone who follows Cheikh Imbecile the Retarditto has got to be a filthy Kabbini be they Sunnis or Christian Sunnis.
Al Rai to Qabbani: allhou BOOM yestrak. BADABOOM