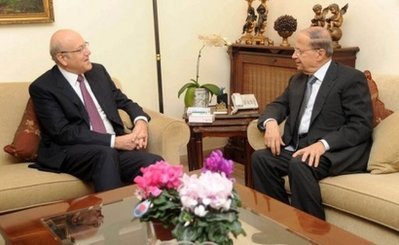 Negotiations on the formation of the new cabinet haven’t yet reached the stage of distribution of portfolios amid reports that Premier-designate Najib Miqati is suggesting that Free Patriotic Movement leader Michel Aoun get 10 ministers.

“Negotiations haven’t yet overcome the obstacle of distribution of shares,” An Nahar daily quoted sources as saying in remarks published Friday.

They said the division of shares would most probably be as follows: 10 ministers for Aoun, including the Tashnag and Marada, excluding Talal Arslan, 10 other ministers for his remaining allies within the March 8 forces and another 10 for President Michel Suleiman, the prime minister-designate and MP Walid Jumblat.

According to the sources, the FPM chief is still studying this formula, which means “we are still far from the formation” of the government.

However, a March 8 source told The Daily Star that Aoun has accepted the 10 portfolio offer.

An Nahar’s sources stressed that the formula keeps the controversial interior ministry portfolio within the president’s share.

As Safir daily also said that the confessional distribution hasn’t been settled yet. Aoun insists on getting five Maronite ministers while Suleiman wants to name two Maronites.

Such differences will most probably further delay the formation of the government. But political sources told An Nahar that some March 8 parties could press ahead with the efforts to form the cabinet in an attempt to confront Caretaker Premier Saad Hariri and his campaign against Hizbullah’s arms.