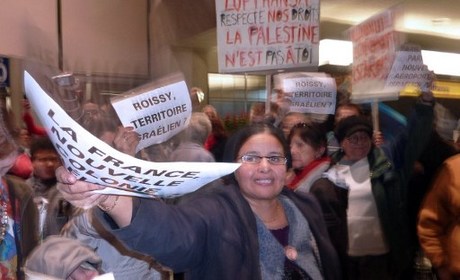 Jordan on Sunday barred pro-Palestinian U.S. and European activists from trying to cross into the West Bank for delivering school supplies to students.

"Two buses carrying 100 activists were not allowed to leave the Jordanian side" of Allenby Bridge Crossing, also known as King Hussein Bridge between the West Bank and Jordan, Walid Atallah, a spokesman for the "Welcome to Palestine" campaign in Jordan, told Agence France Presse.

"The Jordanian authorities stamped their passports and charged them fees and everything was okay. When the buses left, the last checkpoint on the Jordanian side was closed. No reason was given."

Atallah said the "activists left the buses and started to demonstrate near the checkpoint. One of them fainted and was taken to hospital."

"This was deliberate. Jordan did not want Israel to be held responsible for denying the activists entry," he added.

As part of the campaign, aimed at highlighting Israel's control over entry to the occupied territories, the activists sought to provide Palestinian students with a ton of toys, pens, notebooks and other supplies.

"This is our fourth initiative to enter Palestine," Olivia Zemor, spokeswoman for the group, told a news conference before leaving for the crossing, around 35 kilometers (20 miles) southeast of Amman.

"We have around 100 participants, from France, Belgium, Spain, Switzerland, the United States, aged between 10 and 50. All kinds of people, from all backgrounds and religions. They are all motivated to visit Palestine."

Five school buses drove the activists to the crossing as they chanted "Free Palestine!" and sang Palestinian traditional songs. Some wore t-shirts with "I have a dream" printed on them, while others flashed V-for-victory sign.

The campaigners tried to enter the occupied West Bank through Israel in July 2011 and April 2012, but the authorities at Tel Aviv's Ben Gurion airport denied them entry.

"We wonder what the Israeli army is doing (at Allenby Bridge), because not one inch of this territory belongs to Israel -- it is all Jordanian and Palestinian," Zemor said without elaborating.

"Many people, many international organizations trying to go to Palestine are deported, either from Ben Gurion Airport or the Allenby Bridge. It is a pity, it is a shame that our governments do not protest against this."

The activists, who plan to stay for a week in the West Bank, say their mission comes after an invitation by Bethlehem governor Abdel-Fatah Hamayel.

"Now there is a siege on Gaza, there is also one on the West Bank and East Jerusalem, and it is worse than the situation of prisoners, because prisoners have rights," Zemor said.

Some activists were skeptical they would be allowed in.

"I tried in July and April last year, but the Israelis put me in prison for one day. I expect they will reject us again just like they did before. It is ridiculous and a shame," American volunteer Michael Rabb told AFP.

"It is propaganda to say we are free. It is silly that they do not let humanitarian staff enter. This demonstrates how silly and ridiculous Israel is to the eyes of the world."

Melia Haddad, an 11-year-old French-Algerian, came with her mother and older sister.

"I hope this time they let us enter Palestine because we are not criminals, we are not terrorists. We are just human beings and we have stuff to give to the children, and that is all," she told AFP.

We needed your humanitarian support when Palestinian sociopaths were killing our people during the Intifada . You were not there for us . Do not have the audacity to consider yourselves humanitarians .
You are enablers of terror . Take your good works to Syria where the people are being slaughtered in the tens of thousands . Your hypocrisy is beneath contempt .

Once again, anything to blame Israel, when the article specifically states that it was Jordan which didn't allow them through.
I haven't seen a woed of complaint from them about the Jordanian action, which only proves that their intentions were no exactly as they wished everyone to believe.