SSNP Hands over 2 Suspects in Assault on Policeman 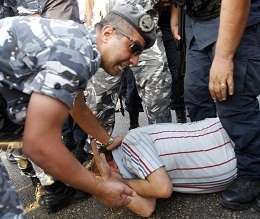 Two Syrian Social National Party members, who were among several others who assaulted a security officer in Beirut's Hamra district, were handed over to the Hbeish police station on Friday.

The two men were identified as Ramzi Abdo and Mohammed Awad.

Earlier Friday, the National News Agency reported that police cordoned off the bureau of the SSNP in Hamra after several party members assaulted an Internal Security Forces officer.

NNA said that four suspects snatched on Thursday night the officer’s gun as he was passing near the party’s bureau in Hamra’s Spears area and took refuge there.

However, the SSNP returned the firearm to the security forces, the agency added.

The suspects were seized by the police after reports that the security forces set a deadline for the SSNP to hand over the suspects, warning that they would take strong measures if it doesn’t meet its request.

The warning came despite a denial by the party that its members had bickered with security forces.

The SSNP also said that police neither cordoned off the party’s bureau in Hamra nor any of its other branches.

Why am I not surprised?

Shame on the SSNP the leadership have become slaves to Hezb Iran..

Karim's mates and he calls everyone else a terrorist .bunch of traitors along with there supporters.

the truth is clear in hamra district: the interior security forces and maaloumat branch are working to deprive ali(the syrian assad ambassador) from his shabiha called SSNP surrounding the syrian embassy in hamra area,it is a chapter in the saga of ali abdelkaim ali .

what happened to those who assaulted the internal security forces in Dekweneh?? They said they were from Amal movement. Maybe this is why no one every tried to catch them?????

Where has the beautiful SSNP gone? Where are the days when our greatest minds and artists were mostly SSNP members? How dirty the party is today, how dirty its name is today...

SSNP is the roguest party in Lebanon. He is the may executer of may 7. it is almost as bad for lebanon as the 3acha2ir.

I agree with you extramildcake the SSNP use to be a great party ,now days they take their orders from Assad and Hezb Iran.SHAME SHAME..

This incident could have been caused by members of any party in this messy country. On the other hand, the SSNP is one bizarre party that sounds and looks more like a religious sect... In my life I knew different people who are SSNP members, they all have the same mind programming, amazing but true, they are so alike in their robotic way of worshiping every line of their leader's ideology, with specific vocabulary and references to a geo-nationlistic composition that they promote... They live in constant denial of reality... Other arab or syrian or lebanese parties might sound silly or unwise but the SSNP is very wacky...