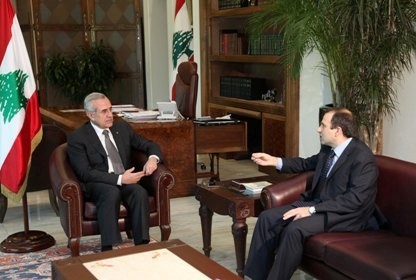 “There was an agreement to hold meetings between some leaders including a meeting between Aoun and Sayyed Hassan Nasrallah … but some surprising political stances … shattered the atmosphere of optimism,” the sources said in remarks published Thursday.

Miqati won’t become “hopeless” or give up his task, they said. “He will become more determined to assume his national responsibilities and intensify his meetings and consultations with everyone to remove all obstacles” facing the government formation process.

The sources stressed that Miqati is keen on forming a cabinet capable of confronting all threats and challenges.

Miqati held talks with the speaker’s aide, MP Ali Hassan Khalil and the political advisor of the Hizbullah leader, Hussein Khalil. An Nahar daily also said that a meeting was held between FPM official Caretaker Minister Jebran Khalil and Hussein Khalil to set the stage for a meeting between Aoun and Hizbullah chief Sayyed Hassan Nasrallah.

However, the meetings that Miqati held on Wednesday further complicated the process of government formation after MP Talal Arslan insisted on getting the defense portfolio. More complications also emerged on the Sunni opposition representative, informed sources told An Nahar daily.

The major hurdle, however, remains Aoun’s demand for the interior ministry portfolio which was part of President Michel Suleiman’s share in the caretaker cabinet.

Aoun’s envoy, Caretaker Minister Bassil, held talks with Suleiman at Baabda palace on Wednesday but the meeting brought nothing new to the cabinet stalemate, As Safir newspaper said.

A member of Aoun’s Change and Reform parliamentary bloc, MP Hikmat Deeb confirmed to Asharq al-Awsat that the formation of the government wasn’t looming in the horizon.

“Our problem in the cabinet issue is neither with Hizbullah nor with Speaker Nabih Berri. It is with the one who is tasked with forming (the government) meaning PM-designate Najib Miqati,” he said. However, “the FPM hasn’t yet reached the stage of regret on naming Miqati.”

He stressed that those who call themselves centrists, including Suleiman, are responsible for the deadlock.

Deeb reiterated that each parliamentary bloc should be represented in the cabinet according to the size of its representation in parliament. “Aoun cannot make compromises,” he said.