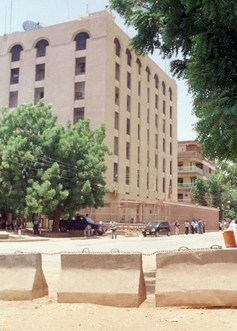 Hundreds of protesters upset over a movie mocking Islam demonstrated outside the American embassy in Sudan on Wednesday, an embassy official said, after attacks on U.S. missions in Libya and Egypt.

"I do believe it was a few hundred," the official said, asking for anonymity. "Our compound was not breached."

He said the demonstrators were upset by the same film which prompted a mob attack late Tuesday on the U.S. consulate in Benghazi, Libya, which killed Ambassador Chris Stevens and three other Americans.

Sudan's foreign ministry expressed "great sorrow" over what it said are escalating insults to Islam in some Western countries, but it also rejected attacks against innocent people unconnected with the slurs.

The amateur American-made Internet video film at the center of the controversy, "Innocence of Muslims", portrays Muslims as immoral and gratuitously violent.

The film is being promoted by controversial Florida pastor Terry Jones, who has drawn protests in the past.

"It has to do with this film," the U.S. embassy official said of the protest by a group which called itself "Sudanese Youth.”

He said embassy staff met three of the protesters, who delivered written demands.

"They were asking for an immediate apology, removal of the YouTube video,” and expressed their displeasure at pastor Jones, the official said.

I bet you these prptesting peope didn't even see this movie. They heard about it in the news and went on to destroy embassies and vause troubles. Bunch of illiterates who have nothing in their lives other than suppressing freedom. Let the movie pass as no one would go to see it of fear for their lives. It was a movie after all. How many movies about jesus were made which contest the Christian belief, including the one by Iran, that came and go unnoticed. This is the way things should be treated.

"Protesters set fire to a KFC outlet in northern Lebanese city of Tripoli, "

This honours The Prophet how?
Or is this far more an unthinking mob venting ill-directed anger, to the detriment of the image of the religion they profess to revere?