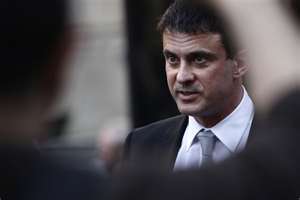 France's Socialist government vowed Thursday to do more to integrate the country's Muslims but warned that it would not tolerate the country becoming a hotbed of Islamic radicalism.

In a speech marking the inauguration of the Strasbourg Grand Mosque, the biggest Islamic place of worship ever built on French soil, Interior Minister Manuel Valls pledged to come down hard on extremists, warning that foreign activists trying to stir up trouble would be immediately deported.

But he also held out an olive branch to the country's four million Muslims by promising state help for the construction of more mosques and for the training of Muslim clerics.

Valls, whose rhetoric has frequently drawn comparisons with that of rightwing former president Nicolas Sarkozy, praised French Muslims for their measured response to the recent publication of a satirical weekly's publication of cartoons caricaturing the Prophet Mohammed.

"Islam has its place in France because the Islam of France, it is a part of France," he told representatives of the Catholic, Jewish and Protestant communities attending the official opening the mosque capable of hosting 1,500 people.

Relations between the French state and a Muslim community that has its roots in former colonies Algeria and Morocco have been strained in recent years by a string of controversies pitting their faith against France's secular tradition.

Legislation introduced under Sarkozy which bans women from wearing full veils in public is widely resented and long-running debates over halal methods of animal slaughter and whether public prayers should be authorized have added to tensions linked to the economic marginalization of many Muslims.

Concern over the development of radicalism among some young French Muslims has meanwhile intensified in the aftermath of Islamist gunman Mohamed Merah's killing of seven people in the southern city of Toulouse earlier this year.

It is in this context that Valls has adopted much of the rhetoric deployed by Sarkozy during his time in office.

He warned Thursday that he would not "hesitate to expel those who claim to follow Islam and represent a serious threat to public order and, as foreigners in our country, do not respect our laws and values."

He also made it clear that the Muslim community as a whole had to accept responsibility for tackling extremism, which he linked to a reemergence of anti-Semitism in the country.

"France's Muslims can congratulate themselves on the singular model that they are building," Valls said. "Of course it remains fragile, not every problem has been solved or overcome.

"If all religions have their share of fundamentalists, it is in Islam that this raises fears. It was on French soil and with a French passport that Mohammed Merah killed in the name of Islam.

"Anti-Semitism is a terrible scourge and its resurgence cannot be disguised."

Built within two kilometers (just over a mile) from Strasbourg's celebrated cathedral, the new mosque has a capacity of 1,300 square meters (14,000 square feet), making it 1.5 times as big as the previous largest one in France, at Evry in the Paris suburbs.

It has a 16-meter copper dome but no minaret and has taken nearly two decades to complete since the project was first launched in 1993.

The cost of construction was 10.5 million euros ($13.5 million), with the local region and the governments of Kuwait, Morocco and Saudi Arabia all contributing.

Same goes for Jewish extremists in France? How about dual french/israeli citizens who serve their military service in occupied Palestine and harass, terrorize and murder Palestinian civilians on daily basis? They are welcome to come back to France and live normal life like if nothing wrong have been committed? France should bring those to justice if they wish to treat all under the same law.

Yes keep blaming Israel and the Jews for Islamic radicalism, for if Israel ceases to exist today, then automatically Saudi Arabia and Iran will become freedom loving democracies, and Pakistan will become the new land of tolerance and love for non-Muslims (especially Christians, Hindus, and even Muslim Shiaa), and Al Qaida, Hezbollah and Hamas will directly disarm, renounce violence and become followers of Mother Theresa's teachings...

The "victim game" that many keep playing with the regular "poor Palestinians" will work no more In Europe and elsewhere, and remember that this is the Leftist French government that came to power with the votes of French Muslims, and not a right wing one that will be branded as "Fascist" if it took such a NOBLE decision.

Islamic radicalism will definitely be the title for humanity's struggle in the next 50 years, and God bless people from all faiths who are facing that monster.

Great news, hopefully all muslims will expelled from scandinavia also

Dr Jekyll or Mr Hyde.....which one are you today schizo Farsi Motormouth? I see your enjoying yourself/BSThrower. Get over it with Israel. Your like a broken record with the same sewage flowing time after time. I've said it many times Israel is evil but at this stage foaming at the mouth everytime HA clergymen preach Israel to your empty skull does nothing but make you look like those typical regressed stone-aged extremists (for all we know you are indeed one of those). Mishmakoul....enough!

Bravo France indeed! Can't beleive i'm reading similar words from schizo BSThrower! Quite contradictory for someone who worships/kneels to an organization that belongs to this extremist Islamic group that will be expelled!

It's ironic that Saudi Arabia supports every single mosque being built in western countries, yet won't let you in their country if you have so much as a little cross or Bible on you. Europe (and the rest of the West) should halt all Islam-related projects until Islamic nations like KSA and other GCC countries, Iran, Pakistan, etc... learn to get over themselves and respect other people's religions.