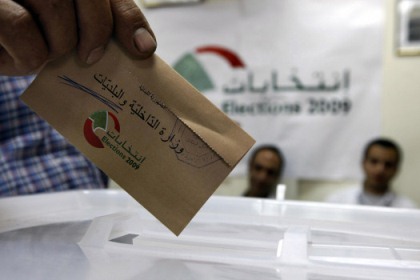 The joint parliamentary committees postponed on Thursday the formation of a subcommittee to study a suitable electoral system and size of districts over sharp differences on who to appoint to the body.

LBCI said that Lebanese Forces MP George Adwan held onto the formation of the subcommittee.

However, OTV said that an initial agreement has been reached to form the subcommittee from nine members, divided evenly between the March 14 alliance and the March 8 camp.

The TV channel said that Kanaan and al-Mustaqbal MP Samir al-Jisr were tasked with handing over the names of lawmakers that will be included in the subcommittee.

The session was postponed to Thursday, October 11.

On Wednesday, Speaker Nabih Berri agreed to a proposal by his deputy Farid Makari to form the subcommittee that would be tasked with carrying out consultations with the rival political parties over whether to adopt the winner-takes-all or proportional representation systems and the size of the electoral districts in the new parliamentary electoral law.

The joint parliamentary committees have been recently discussing the new electoral draft law referred by the cabinet and two other proposals by the March 14 opposition and the Change and Reform bloc led by Free Patriotic Movement MP Michel Aoun.

However, the sessions reached a deadlock over sharp differences between the political rivals on which electoral system to adopt and the size of the electoral districts.

The committee will be headed by Makari and include representatives of all the parliamentary blocs, according to An Nahar daily Thursday.

The government approved in August a parliamentary electoral law based on proportional representation and 13 electoral districts, however, the opposition's proposal made by MPs Adwan, Sami Gemayel and Butros Harb supports the formation of 50 small-sized districts in a winner-takes-all system, while a plan suggested by the Change and Reform bloc allows every sect to elect its own MPs under a proportional representation system with Lebanon as a single district.

Great this will go on unabated and return us to where we are in a year or two! meanhile how about they tackle other issues such as Electricity and Water? no money in this racket?