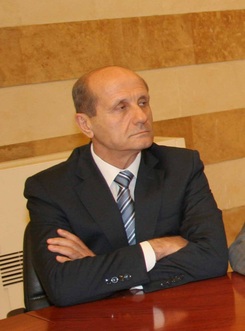 The military court wrapped up on Tuesday investigations in the Roumieh prison break carried out by three Fatah al-Islam inmates with the number of detained security guards reaching 13, reported the National News Agency.

Cabinet is set to discuss the recent Roumieh prison scandal in a session scheduled for the Grand Serail on Tuesday, reported As Safir newspaper Tuesday.

Interior Minister Marwan Charbel told the daily that he will demand that the government take “the appropriate and necessary measures to tackle the file.”

“It is shameful to remain silent over the matter because prisons have become centers for oppression and humiliation,” he noted.

“Inmates are discharged from prison as criminal experts,” he added.

On Friday, it was discovered that three Fatah al-Islam prisoners had fled the jail at least a month ago.

Sixteen security forces members have been detained in the scandal amid reports that the wide “security and judicial purification” operation of the prison will be carried out soon, said An Nahar daily on Tuesday.

Sources monitoring the situation told the daily that the first phase of this operation included a raid on Roumieh prison's B bloc, at the Internal Security Forces' General Directorate's orders.

The raid helped end the “flawed situation” at the bloc where the Islamist inmates are held, it added.

Voice of Lebanon radio (93.3) reported on Tuesday that the “flawed situation” included the inmates' possession of a 62 inch flat-screen television and internet access that allowed them contact with extremists from all over the world.

The source told An Nahar that the new security measures will be taken at the prison after the investigations in the scandal are complete.

In addition, the prison will witness wide logistic and administrative construction operation to install a new network of surveillance cameras and modern doors and gates.

Justice Minister Shakib Qortbawi and Interior Minister Marwan Charbel inaugurated on Monday a new courtroom at Roumieh prison to speed up the trials for the Fatah al-Islam inmates, as 11 security personnel and two officers were referred to the Military Court over the recent prison break.

Media reports said Monday that eleven security personnel and two officers were referred to the Military Court over the prison break on charges of "negligence and direct responsibility."

This is one of the core elements that Lebanon is not to be called a democratie. The care for the mental- fycical ill, and the care and reintegration in society for those who made a step to far over the line (prissoners)is in Lebanon like middle age treatment.