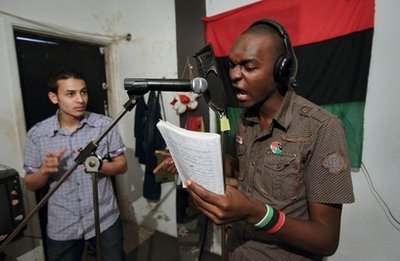 Libyan rebel fighter Jaad Jumaa Hashmi cranks up the volume on his pickup truck's stereo when he heads into battle against Moammar Gadhafi's forces.

He looks for inspiration from a growing cadre of amateur rappers whose powerful songs have helped define the revolution.

The music captures the anger and frustration young Libyans feel at decades of repressive rule under Gadhafi, driving the 27-year-old Hashmi forward even though the heavy machine gun bolted on the back of his truck — and other weapons in the rebel arsenal — are no match for Gadhafi's heavy artillery.

"It captures the youths' quest for freedom and a decent life and gives us motivation," Hashmi said as he sat in his truck on the outskirts of the front line city of Ajdabiya. He was listening to "Youth of the Revolution," which the rap group Music Masters wrote just days after the uprising began in mid-February.

"Moammar, get out, get out, game over! I'm a big, big soldier!" sang 20-year-old Milad Faraway, who started Music Masters with his friend and neighbor, 22-year-old Mohammed Madani, at the end of 2010.

Rather than grabbing AK-47s and heading to the front line with other rebels to fight Gadhafi's forces, Faraway and Madani stayed in Benghazi, the de facto capital of rebel-held eastern Libya, and picked up a microphone.

"Everyone has his own way of fighting, and my weapon is art," said Faraway, a geology student, during a recent recording session in a small room on the fourth floor of an aging apartment building in downtown Benghazi. The room was equipped with little more than a microphone, stereo and computer.

The room was decorated with a large red, black and green rebel flag and a framed photo of the Guns N' Roses guitarist Slash. Faraway and Madani smoked cigarettes and sipped steaming glasses of sweet tea as they recorded lyrics for their latest song, a tribute to cities caught up in the revolution.

The freewheeling rap scene developing in Benghazi indicates how much has changed in eastern Libya in the past two months. Speaking out against Gadhafi before the rebellion used to mean prison and maybe even death. And rap, like other forms of Western culture, was despised by Gadhafi, who burned foreign musical instruments and books after he seized power in 1969.

"I always wanted to talk about Gadhafi's mistakes and crimes, but we never had the chance for free speech," said Madani, who is the son of a famous local singer in Benghazi and works part-time in his family's cell phone and car parts shops. "All you could talk about was how good Gadhafi's revolution was."

Faraway, who like many rappers in Benghazi is known by his nickname, "Dark Man," and Madani, aka "Madani Lion," form the core of Music Masters, but the composition of the group has changed over time. One of the rappers quit just after the uprising started because he feared being targeted by Gadhafi's thugs, Madani said. The group recently added 24-year-old Rami Raki, aka "Ram Rak," who grew up in Manchester, England.

Many of the songs that Music Masters and other groups have recorded in the past two months feature rapid fire lyrics reminiscent of Eminem. The lyrics ridicule Gadhafi and lambast him for his treatment of the country in the past four decades.

"Gadhafi, open your eyes wide and you will see that the Libyan people just broke through the fear barrier," sang the group Revolution Beat in their song "17 February," a reference to the so-called "Day of Rage" when protesters took to the streets in several towns and clashed with security forces.

Roughly a dozen rap songs recorded since the start of the rebellion have been put on CDs with rebel-inspired album covers and are available for sale in downtown Benghazi. One cover has a drawing of fighters on a captured Gadhafi tank flying the rebel flag.

Some of the songs mix Arabic and English, a testament to the American origins of rap. When the rappers perform in public, which is rare, they wear baggy pants, T-shirts and baseball caps typical of many American rappers.

Rap is not the only style of music that has been used to create anthems for the revolution, but Mutaz al-Obeidi, a 23-year-old member of Revolution Beat, said it was uniquely positioned to appeal to Libya's youth.

"Rap is more popular than rock and country among the young people in Libya because it expresses anger and frustration," said al-Obeidi, an English student, standing in a small recording studio in the official rebel media center in Benghazi that is used by Revolution Beat.

"The guys at the media center contacted us and said you guys have a rap group and we want rap to be part of the revolution," said Youssef al-Briki, 24, who started Revolution Beat with Islam Winees, 21, in 2007, but originally called the group Street Beat.

Al-Briki, aka "SWAT," works as a garbage man, and Winees, known as "A.Z.," is a small-time businessman. Both have the tough-guy vibe of gangsta rappers and expressed admiration for Tupac Shakur, who was shot and killed in Las Vegas in 1996.

Al-Briki said he looks forward to writing the first song after Gadhafi is ousted.

What will it be called?

"Finally He Did It," said al-Briki.