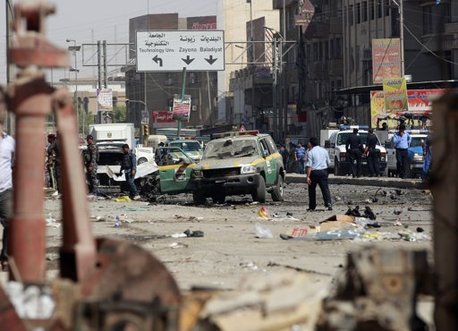 Iraq's deputy interior minister and a police chief fired over a jail break last month in which dozens of al-Qaida militants escaped traded barbs on Saturday over who was to blame for the prison uprising.

Major General Abdul Karim al-Khazraji, the top cop in Salaheddin province at the time of the jail break, released a letter dated days before the escape requesting reinforcements, while deputy minister Adnan al-Assadi shot back that the proposal had been approved but Khazraji had failed to act.

More than 100 prisoners managed to escape from the prison in the September 27 uprising, an assault later claimed by al-Qaida's front group in Iraq, but dozens were either killed or re-captured in the subsequent days and weeks.

On Saturday, Khazraji released a letter addressed to the interior ministry and dated September 25 in which he complained the prison in the city of Tikrit was not properly secured, and that some inmates had managed to "impose a kind of control on the rest of the prisoners."

He called for rapid intervention and counter-terror forces stationed in Salaheddin province, of which Tikrit is the capital, to be deployed to the prison to address the situation, "because these forces have the means and abilities to carry out this duty."

In the letter, a copy of which was obtained by Agence France Presse, Khazraji said prison officials had tried to impose order, but had been "confronted by chaos."

Assadi told AFP that the letter was genuine and had been received by the interior ministry, but said that while the request had been approved, Khazraji had failed to act quickly enough.

"He did not use them, or even organise for them to enter the prison," Assadi said in an e-mailed response to questions. "Instead, he told the prisoners that he received a letter from the interior ministry transferring them, that he was going on leave for three days, and would transfer them upon his return."

"This is what we consider collaboration -- by telling them this, and then not using the force he requested," Assadi added, without elaborating.

Khazraji was dismissed in the wake of the jail break, in which 16 security force personnel were killed.

The assault on the prison that led to the escape was claimed by al-Qaida's front group the Islamic State of Iraq on October 12, came after ISI announced in July a campaign to regain territory, target judges and prosecutors and free prisoners from jails.