Free Frocks Let US Cinderellas Go To The Prom 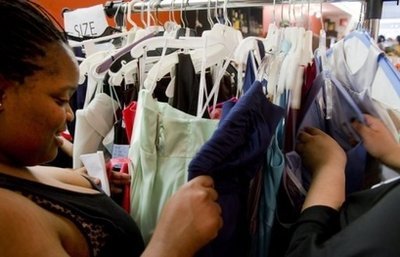 On a sultry afternoon in Washington's Chinatown, dozens of teenage girls tried on silk and satin evening dresses, chose glittery bling and handbags to match, and walked out without paying.

And it was all perfectly legal.

The girls were at a prom dress giveaway, one of a growing number of events where haves help the have-nots live part of the American dream despite the tough times that have hit the United States.

The prom, an annual high school dance, "is a really important time for Americans and we want to make girls from all different backgrounds feel beautiful on that day without going broke," said Robin Fisher, one of the organizers of the Prom Dress Project, from the Polished Image style consultancy.

"All this stuff was donated, every single thing," she said, waving her hand like a magic wand at racks of evening dresses, tables laden with glittery necklaces and earrings, and silk clutch handbags.

Even the space for the one-night event was donated, and dozens of girls waited in the stuffy corridor of the long, narrow Chinatown Coffee Company cafe to try on dresses in the ladies' room.

Tiffany Cofield held a full-length burgundy dress with diamante studs around the empire waist up against her slender body. A pair of drop earrings caught the late afternoon sun that shone through the cafe's bay window.

Tiffany went to her school prom last year, too, but her mother had to pay for everything.

"Dress, shoes, jewelry, hair -- one night, $600," Jacqueline Cofield told Agence France Presse. "The people who did this are a blessing."

All the girls in the cafe-turned-changing-room were African American and attend high schools in poor neighborhoods like the southeastern Anacostia district of Washington.

In one southeast ward, the number of people who have such limited resources and incomes that they are eligible for federal aid to buy food has risen by more than 11,000 in a decade to reach 35,423 last year, the Urban Institute says.

That's more than half the ward's population.

For them, splashing out on a prom dress is out of the question.

"The prom is very expensive and very taxing on a family, especially single moms. And there are a lot of single moms in this area," said Stefanie Manns, who will be holding a prom dress giveaway for needy girls in Prince George's County at the end of April.

"With the economy the way it is, a lot of families just can't afford the prom."

But many will find the means to send their daughter to the prom in the dress of her dreams.

"If we didn't have this event to come to -- which I'm glad is saving me $600 -- I'd still find a way to let her go to the prom," said Carla Campbell as she waited in line with daughter Martinea to pick out a dress, preferably pink.

"She's a good student and I know how important the prom is. It's a coming-of-age for Americans."

Even in upscale neighborhoods like Georgetown in northwest Washington, where the average family income is more than $250,000, some parents balk at the price on the tag of prom dresses, said Gilda Mizrahi, owner of the "Signature" shop on Wisconsin Avenue.

But when mom goes into shock at the price of a frock in Signature, it's not a fairy godmother with a dress giveaway that comes to the rescue but more usually "grandmothers, aunts, friends."

"Everybody will chip in to let a girl have her dream dress for the prom," said Mizrahi.