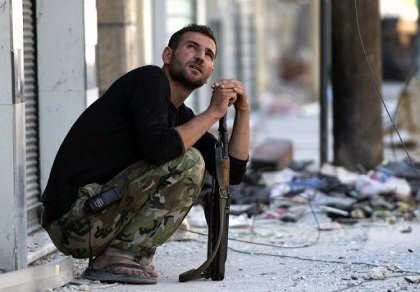 The Syrian rebels battling the regime of President Bashar Assad have shoulder-launched missile systems, including Stingers made by the United States, Russia's top general said on Wednesday.

Russian chief of staff General Nikolai Makarov, whose country is the Syrian regime's top arms supplier and has refused to back the rebels, said it was not clear who had delivered the weapons.

"We have information that the rebels fighting the Syrian army have shoulder-launched surface-to-air missiles of several states, including Stingers made in the United States," he said quoted by the Interfax news agency.

"We need to still find out who has delivered them," he said.

Makarov said it was possible that these and other weapons could have been delivered to the rebels from abroad on several means of transport, including passenger planes.

"For this all kinds of transport could be activated, including civil aviation. This is a serious matter," Makarov said.

NBC News of the United States had reported in July that the rebel Free Syrian Army had obtained two dozen surface-to-air missiles (man-portable air-defense systems known as MANPADS) that were delivered via Turkey.

Makarov noted that Washington has denied sending arms to the rebels but said the information that U.S.-made Stingers had appeared in the rebels' arsenal should now be taken into account.

"The Americans say that they have not delivered anything to the rebels. But we have reliable information that the Syrian rebels have foreign-made MANPADS, including American ones."

Makarov's comments come as Russia is under sustained pressure from the West, Turkey and Assad's foes in the Arab world to cut its military cooperation with the Syrian regime.

The Turkish authorities earlier this month forced a Syrian Air passenger plane en route from Moscow to Damascus to land in Ankara on the grounds it was carrying an illegal Russian cargo for Syria.

Turkish Prime Minister Recep Tayyip Erdogan has said the cargo confiscated by Ankara before the plane was allowed to carry on was "war equipment". However Russia has insisted the cargo was perfectly legal radar technology.

President Vladimir Putin last week defended Russia's right to trade weapons with whomever it wanted, so long as sales did not break any sanctions from the U.N. Security Council where Moscow has a permanent, veto-wielding seat.

"In all other cases, no one can on any pretext dictate to Russia or any other state with whom and how it should trade," Putin said.

Moscow has defiantly refused to take sides against Assad, slamming the West and Turkey for making clear their support for the rebels battling his regime.

it was sold to the rebels by hizballah members for a lot of cash,from the depot of arms that exploded after that in nabi sheet to hide the "transaction".

The bear has been poisoned and is slowly dyeing

@ the1phoenix : Smalla inta khabir 3askare? first of all it doesn't say which stingers they were handled to the rebels. Second of all, Stingers follow heat, and some of the Mig fighters( mig29( in Syria are equipped with Russian Technology to redirect such missiles away !! Syrian Air force is using for now their old fighter jets (mig 23) which are easy target but if they use their mig 29, stinger missiles are useless!
WHo told you ak47 was used to shoot down fighters?

The rebels also have Russian made SA-7's too. They just don't have enough of them. They also need longer range systems too. The Russians feel the "sting" from the stingers from their Afghan war.

If you will notice the video's lately.....the Syrian MiG's are dropping flares on their bombing runs. They weren't two monts ago.

and suffer they should for all the pain they caused are still causing in Lebanon.

MiG-29 system against heat sensing missiles can be circumvented easily. Regariding flares ofcourse.. it requires at least 2 Stinger missiles to shoot down a Jetfighter... the first to force it to drop it's flares the 2nd to bring it down.