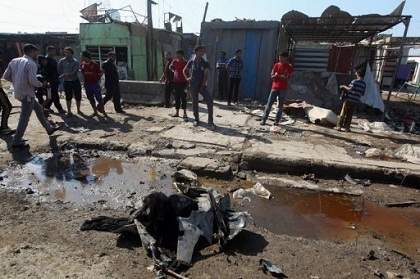 Al-Qaida's front group in Iraq claimed responsibility on Monday for a series of shootings and bombings over the Eid al-Adha holiday that killed dozens of people nationwide.

The Islamic State of Iraq said the attacks over the four-day Muslim holiday from Friday were in response to the purported arrest of Sunni Arab women by Iraqi security forces in an effort to locate their wanted male relatives.

"The Islamic State alerted a part of its security forces in Baghdad and elsewhere to send a quick message to the apostate beasts and their government," said an ISI statement.

"They will pay dearly for what they have done, and they will not dream securely in the night or day, during Eid or not."

Attacks over the Eid al-Adha holiday have so far claimed 44 lives and left more than 150 people wounded, with the worst of the violence striking on Saturday when 31 people were killed.

Al-Qaida's front group is widely seen as weaker than during the peak of Iraq's sectarian bloodshed from 2006 to 2008, but is still capable of carrying out mass-casualty attacks on a regular basis.

Saudi Arabia and Israel are natural allies because both governments are so out of touch with the majority of their own people. It's the crazy minority in both that delights in being unreasonable. "Why talk to them when I can see they are crazy just by the fact that they haven't already said they agree with everything I might ever think? Besides, don't I have a big gun? And don't ask me to explain my plans. That only proves you are crazy."