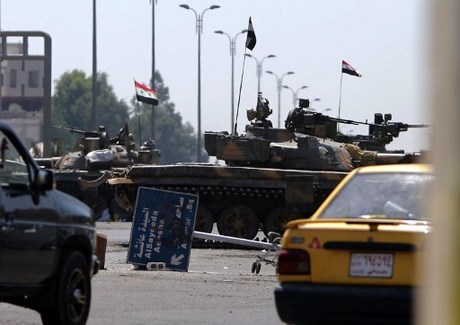 A Syrian fighter jet hit targets inside Damascus for the first time on Tuesday, a watchdog said, as air strikes pounded rebel bastions around the country and an air force general was shot dead.

The warplane dropped four bombs on the east Damascus neighborhood of Jobar, near the opposition-held suburb of Zamalka, where rebel fighters were locked in fierce clashes with the army, the Syrian Observatory for Human Rights said.

Only helicopter gunships had previously been used to strafe areas inside the capital, said Observatory director Rami Abdel Rahman.

Agence France Presse correspondents reported that the bombing run was heard across the capital.

The strike, and more raids around the country, came as Syrian rebels claimed responsibility for the killing in Damascus of an air force general.

State television said the general, Abdullah Mahmoud al-Khalidi, was killed in the north Damascus district of Rukn al-Din, but gave no further details.

The general was was shot dead on Monday evening as he left a friend's home, a security source in Damascus told AFP on condition of anonymity.

In a statement posted on the Internet, the rebel Free Syrian Army (FSA) said it had killed Khalidi, who it said was in charge of training, along with an air force intelligence officer.

The government has intensified air strikes against rebel-held areas in recent days, with more than 60 raids on Monday, the most in a single day so far, the Observatory said.

On Tuesday, air strikes hit rebel bastions around Damascus including the town of Douma, where the Observatory said large numbers of people were killed or wounded.

The northwestern town of Maaret al-Numan, seized by rebels earlier this month, was also hit, with seven civilians killed, including four children, it said.

The army has been battling rebels for weeks for control of the town, which is on a key supply route between Damascus and the northern city of Aleppo.

Tuesday also saw clashes between rebels and troops backed by Palestinian fighters at the Yarmuk refugee camp, home to 148,500 Palestinians on the edge of the capital.

Anwar Raja, spokesman for the pro-Damascus Popular Front for the Liberation of Palestine-General Command, said its forces clashed for about an hour with rebels trying to infiltrate the camp but that there were no casualties.

There are more than 510,000 Palestinian refugees living in Syria, and their leadership is largely supportive of President Bashar Assad's regime.

At least 36 people, including 22 civilians, were killed in fighting on Tuesday, the Observatory said.

With international envoy Lakhdar Brahimi due in China in a bid to revive peace efforts, Qatari Prime Minister Sheikh Hamad bin Jassem al-Thani, a vocal supporter of arming the rebels, said the international community's failure to halt the fighting was making it complicit in the violence.

"What is happening in Syria is not a civil war but a war of extermination against the Syrian people," he told Al-Jazeera television.

The war, he charged, was being waged "with a license to kill, endorsed firstly by the Syrian government and secondly by the international community."

On the first day after the Eid al-Adha Muslim holiday, which saw a ceasefire bid collapse in the face of renewed clashes, car bombings and air strikes, the Observatory said more than 500 people had died in fighting over its four days.

Brahimi was to travel to China from Russia. Both are historic Damascus allies and have repeatedly blocked tough U.N. Security Council action against Assad's government.

Diplomats say the U.N.-Arab League envoy is to present the council with new proposals in November following the two visits.

The uprising, which began in March 2011 as a peaceful protest movement, has escalated into an armed insurgency. More than than 35,000 people have died according to the Observatory, at least 20,000 according to the U.N.

Most of the rebels are members of Syria's Sunni Muslim majority. Assad's government is dominated by his Alawite minority.

i am sorry jcamerica but you make no sense.. the people getting killed have nothing to do with what the regime did in lebanon. the regime was doing the same to these people fro 40 yrs. the regime is not the country and assad is not the alawites. its a murdering family which took a whole country hostage.

Syria bought or was given billions in military aid just to bomb their own people--so much for their promises of 'defending themselves against Israel'. So sad, and the worst thing is that groups and countries try to use Israel to justify force, even on their own people. Hey Hamas, Syria, Iran, and HA--have you figured this out yet? If you haven't you are going down in a ball of failure.

Where were my brothers you ask Jcamerican? Do you know what the $#$%x@!@! are you talking about for starts? Do you know much about this Syrian regime? Do you have any clue about the family and atrocities it has committed on it's own people let alone Lebanese? How many Lebanese for a start have gone missing and no one knows their whereabouts since Assad's pigs had their smell all over it? Just now as you see happening all around the Middle East people are standing up to these thugs/mobsters/ruling families. They are fighting for their dignity, freedom and a democratic system. Maybe the only thing that will happen is eternal conflict as you think but at least they are standing up to this scum and his allies (HA/Iran) and we should ALL unite and overthrow these regressed stone-aged dictators!

The snake is trying to bite itself.