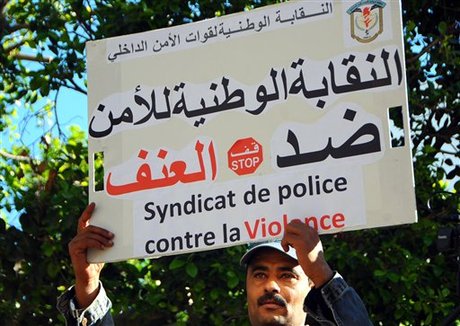 Hundreds of officers from several Tunisian security forces demonstrated on Thursday against attacks on them, particularly by Salafists, and protested at the lack of resources to protect themselves.

Police, national guard, civil defense and the presidential guard officers protested for an hour in front of the interior ministry, an Agence France Presse reporter said.

"We denounce the violence against the officers and urge the government to take steps quickly to protect them and their families who are at risk," Sami Gnaoui, an official at the General Union of the National Guard, told AFP.

The protesters were demanding they be given appropriate equipment and proper instructions to enable them to ensure their own safety when attacked.

The discontent was triggered after the head of the area's public security brigade was assaulted in Manouba by a Salafist.

A suspect was arrested, which sparked violence on Tuesday in which Islamists attacked two guard posts in the Tunis suburb of Manouba.

In the ensuing clashes an attacker was killed and two policemen wounded.

On Thursday, Imam Khaled Karaoui of Manouba's Ennour mosque, who was among those who attacked the national guard posts, died of wounds sustained that night, local national guard commander Nizar Badis said.

"She does not stop insulting us and she comes to a gathering of the security forces," said a police officer.

Since Ben Ali's ouster, radical Islamists have carried out a number of attacks, including against security forces and on cultural events.

The opposition accuses the government, led by Islamist party Ennahda, of failing to rein in violence by Salafists, a hardline branch of Sunni Islam.

The authorities have vowed to crack down on Islamist violence in the wake of a Salafist-led attack on the U.S. embassy in September in which four assailants were killed.

Tunisian security forces are poorly viewed by the people given the repression they carried out under the regime of Ben Ali, and no major reforms have been implemented so far by the present Islamist Ennahda party-led government.