Franjieh: We Must Know Who 'Betrayed' al-Hasan, Suleiman Stance on Samaha Case Extreme 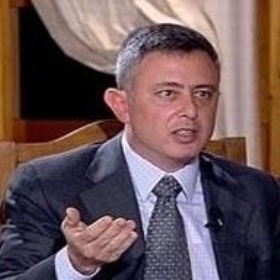 Marada Movement leader MP Suleiman Franjieh on Friday said one should not ask who killed Intelligence Bureau chief Maj. Gen. Wissam al-Hasan but rather who “betrayed” him.

“Western intelligence agencies were asking Wissam al-Hasan about the rise of extremism and he was reassuring them before he got killed,” Franjieh added, wondering why al-Hasan was “assassinated amid the shift in the international stance on the Syrian crisis.”

“Blaming Miqati for al-Hasan's blood is a way to seize the premiership,” Franjieh charged.

“March 14 is not boycotting the government in order to topple it, but rather to form its own government or for the electoral law,” added Franjieh.

The March 14 forces on Tuesday declared a “total boycott” of Miqati's government, calling for a “neutral, salvation government that endorses the Baabda Declaration as its ministerial Policy Statement.”

Franjieh claimed that the Intelligence Bureau's arrest of Israeli spies was “coordinated with the Americans in order to give credibility to the bureau that enables it to accuse the four Hizbullah members” of involvement in the 2005 assassination of former premier Rafik Hariri.

Answering a question, Franjieh said: “If Wissam al-Hasan had a role in sabotaging Syria, that means that Syria has the motive to assassinate him, but I don't believe that it had anything to do with the operation.”

“March 14 are hinting that al-Hasan was a friend of Israel and an enemy of Syria by refusing to accuse Israel of the assassination,” he added.

“The president should have congratulated al-Hasan and (Internal Security Forces chief Ashraf) Rifi and awaited the results of the investigation instead of launching accusations,” Franjieh added.

Al-Hasan was killed on October 19 in a car bomb attack in the Beirut district of Ashrafiyeh.

The powerful explosion rocked a street adjacent to Sassine Square in Ashrafiyeh, leaving two other people dead and more than 100 wounded, in the first such attack in the Lebanese capital since 2008.

Al-Hasan was close to former Prime Minister Saad Hariri and hostile to the regime in Syria. He had been tipped to take over as ISF head at the end of this year.

The Intelligence Bureau played a central role in the arrest in August of former minister Samaha, who has close links to Damascus and was charged with planning attacks in Lebanon and transporting explosives in collaboration with Syrian security chief Maj. Gen. Ali Mamlouk.

Yes, ofcourse it's Israel and US that killed Al-Hassan better yet his son actually killed him so he could get his money. For gods sake are the Lebanese going to remain that stupid beleiving any bullshit these conspiracy theory mouth peices will throw ?

It's one thing to be a sceptic it's ADMIRABLE actually but at one point you need to call an apple an apple. Arresting Smaha with the best kind of evidence you can ever arrest anyone on is the biggest EVER blow to the Syrian regime that is a fact no one can dispute it. You should not expect to live after giving such a blow to a totalitarian nazi-like regime.

Samaha has been arrested, all the evidence are there yet the judiciary file seems to be not moving. The government does not seem to be in a hurry to move this file ahead but rather block the STL.

By the way, ISF found three other cars with explosives in Achrafieh (one near hotel Alexandre, one in the street next to Hotel Gabriel from the back) few days after the explosion. They arrested the guy who stole the car that exploded and now they know almost every thing regarding the perpetrators. Suleiman knows it all.

Franjieh is an illiterate Syrian puppy he said it himself and nothing comes out of his mouth will surprise me.

You are right. what an enormous stupidity coming out from his mouth. It reminds me when Samer Hanna was killed in his helicopter by a Khizbullahi, Aoun said : What was a Lebanese Air Force Helicopter flying over Khizbullah area. Now Frangieh is saying ok for the killers but not for those who betrayed.

The tool Frangieh is too stupid to realize that he's the postman relaying the Syrian warming to President Sleiman that they are not amused by his performance ie his newly found independence. The President should take the utmost precautions we all know what happens to people who dare cross the Syrian regime.

WOW!!! Franjieh you are sooooooo retarded. Must of took you a while to put your BS facts together. Nope you just don't make sense.

Frangieh needs to remind us from time to time that he still is the loyal Syrian lackey. Also he needs to remind us that he is still an imbecile because he never makes sense. On the contrary he is proving the collusion of Bashar in this affair. Like his grand father he is a traitor to Lebanon and the Lebanese. In any other country he will be strung from a lamp post. Lebanon with so many bright educated people should not allow these morons to keep polluting the political arena.

What prompted him to say anything now? Anything coming out of his mouth is usually garbage and not many news outlets even have him on any more no matter which side they are on.

The guy who betrayed him is a partner in crime... what difference does it make? Catch the bastard and you will grab the rest of the killers... Better yet, overrun Dahieh and catch them all at once... Start with the airport... And you idiot, stop "selling" your son to the people in your zip code... and the sheep you rule over... he is no different than you, an illiterate imbecile... But what do I know, this is how politics are in this zip code and this the scum that runs the show...

Yes idiot ! We must know who killed Hariri, as the iranians and the syrian were his 'friends', we must know who killed Gebran, Pierre Gemayel, Samir Kassir, etc... We must know who attempted to kill Marwan Hamade, May Chidiac, Elias Murr, Samir Geagea, Boutros Harb....We must not though provide telecom data to help the investigation because it infringes on private liberties. We must fight any neutral tribunal investigating those murders because it is against national sovereignty. We must hide and protect those prime suspects that can help unravel the political killing fields underway.

But equally, we will spy on every lebanese, hand over lebanese and syrian citizens to their deaths in the hands of the syrian butchers, threaten judges and cripple their action locally, eliminate some of them if necessary...Read my lips: there is only one culprit, the syrian-iranian devil axis, which Hizbollah is only a small offshoot of. Smash the snake's head and its venim will be of no use. This will happen sooner or later: Wait to see how the nuclear iranian con file if going to develop into major drama !

Hey jcamerican I`m not a slave or a nigger either dude ,but I would rather be an LF than a( Syrian Marada movement ) and please dont compare Jumblatt or Hakim to this low life punk..

Imagine if M8 made such a drama when the greatest martyr Emad Mogniyeh was assassinated in Damascus in 2008 like M14 most disorganized drama we saw after the assassination of Al Hassan? M14 are sensitive spoiled children and cannot run the country why they are not running the country.

I am glad you also appreciated the Chouf massacre of Christians jcamerican, keep up the good work.
Hafez

Pure Lebanese !
I will advise him to get his language ready so he can join his partner in crime in he'll .

He thinks that the all the Lebanese people are stupid.

The one who betrayed him is as guilty as the one who pulled the trigger or clicked on the remote… Stop beating around the bush with your BS… You are as happy as many of his enemies that he is gone… You are such a pathetic poor excuse for a human being and a legend in your own mind… And just like your grandpa groomed your crooked father, it looks like you are doing the same with your useless kid… The apples did not fall far from the tree… Rotten apples…

Hey Franjieh.....It was your Syrian and Hezz friends who betrayed him. Done....now we know and you can shut up.

Seriously someone actually asked this thing for it's opinion. Might as well talk to a shoe it's more thoughtful and articulate, how desperate is Al-Manure!

Bashar the Magnificent's magic act was bombing, the audience was booing his every move when in a last desperate attempt to win them over he reached into his hat and pulled out a mentally retarded chimp. Later that night the rotten tomatoes vendor around the corner brought a brand new Rolls.

My friends we need to understand Frangieh's mindset. The Frangiehs and the Assads go way, way back. There is friendship and business and even family ties between them if I'm not mistaken. These two families, just like countless leading families in Lebanon place a priority in the interest of their respective clans, not their respective countries .

eeeeeeeeeeeeeeeehhhhhhhh!!!!!!!sorry to burst your bubble kiddo but in order to assassinate one person an entire neighborhood is demolished in the process i know of only one bloody regime in the world capable of such mindless and vengeful assassination specially after all the prelude campaign launched by its proxies few months ago.

Vile hatred usually comes in the form of car bombs in civilian areas, not words.

I agree with you to some extent. But when one side is openly allied militarily with outside powers (Syria and Ian) at the expense of its Governmental institutions. And when all the political assassinations are committed against one camp. I feel I must support the least of both evils. Once a movement starts in support of a new slate of young, educated and patriotic crop of leaders I will be with them.

If we hail the FSA for getting our Lebanese opponents then we will be committing the same error committed by M8 now. I would rather justice be accomplished internally or we will be followers of outside powers forever. So I will not support any FSA involvement in Lebanon, they are not Santa and there is a price for anything they give you.

these 'oponents' are killing us, these oponents want us to be slaves or else be killed. Did peaceful movements in Syria pay off?? on one likes violence and i am being realistic here, these thugs only understand the language of force. The low turn out in M14 demos is nto cause people are pro M8 but because people are refusing to turn the other cheek and want to fight back and they gotten sick of being killed, go to tripoli and see the higher turn out in people carrying weapons. I am just being realistic here.

@jabal10452 you are correct. Hafez protected Suleiman when he ran away from the Leb Authorities upon his church massacre, Suleiman would go nowhere without his two pistols, these things tell you the kind of family that raised this kid and brought him to the Lebanese political power. Since this kid knows everything, Who put the bomb on the helicopter that took off from your grandfather mansion in Ehden and killed Army General Chalouhi?

Sure Nostrodamis, convincing argument I see you subscribe to conspiracy theories also.... You forgot one small detail, what will that small UN force in the south do? particulary if HA is threatening US inerests in Lebanon ie the m14 population? another reason for israeli intervention me thinks.. HA is stuck between a rock and a hard place. It realises this and must stay relevant ie a valid member of the lebanese political cliamte hence Michel Aoun's role... otherwise without this so called legitamcy it is already branded a terrorist organisation and will be attacked if it did not enjoy internal support..