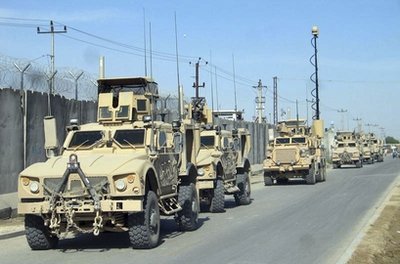 The Taliban on Saturday announced the beginning of their spring military offensive against the U.S.-led coalition, a day after a new Pentagon report claimed that the militants' fighting spirit was low after sustaining heavy losses on the battlefield, Associated Press reported.

In a two-page statement, the Taliban said that beginning Sunday they would launch attacks on military bases, convoys and Afghan officials, including members of the government's peace council, who are working to reconcile with top insurgent leaders.

"The war in our country will not come to an end unless and until the foreign invading forces pull out of Afghanistan," said the announcement released by the leadership council of the Islamic Emirate of Afghanistan, which is what the Taliban calls itself.

Senior officers with the U.S.-led coalition said on Friday that the Taliban — aided by the al-Qaida-linked Haqqani network — have plans to conduct a brief series of high-profile attacks, such as suicide bombings, across the country in a display of power as fighting gears up with the warmer weather. The senior officers spoke on condition of anonymity to discuss recent intelligence that lead to the assessment.

Lt. Col. John Dorrian, a spokesman for the coalition, said the Taliban planned to use the spate of violence as a "propaganda ploy" to try to demonstrate their relevance and create the perception of momentum despite recent setbacks.

The Pentagon report said the insurgents' momentum had been "broadly arrested" and their morale had begun to erode. Hundreds of insurgent leaders have been killed or captured and since last July 700 former Taliban have officially reintegrated into Afghan society and another 2,000 insurgents are in various stages of the process, the report said.

The Taliban, known for their resiliency, said insurgents will target "foreign invading forces, members of their spy networks and other spies, high-ranking officials of the Kabul puppet administration ... and heads of foreign and local companies working for the enemy and contractors."

The Taliban ordered its fighters to pay "strict attention" to protecting civilians during the spring offensive. A recent U.N. report said about three-quarters of the estimated 2,777 civilians killed in Afghanistan last year died at the hands of insurgents, not international forces.

Also on Saturday, the coalition released initial findings of the April 27 attack at the Kabul airport where a veteran Afghan military pilot opened fire, killing eight U.S. troops and an American civilian contractor who had been training the nascent Afghan air force.

The shooting was the deadliest attack by a member of the Afghan security forces, or an insurgent impersonating them, on coalition troops or Afghan soldiers or policemen. Seven of the eight U.S. airmen killed were commissioned officers.

The gunman was severely wounded before leaving the room where he staged the attack and was found dead in another part of the building, according to initial findings of the incident. The NATO trainers were armed with weapons and ammunition and the gunman appeared to be carrying two weapons, the coalition said.

According to base regulations, all members of the military are required to clear their weapons when entering a coalition compound and remove ammunition magazines from their weapons. If the trainers heeded that regulation, they would have had to reload before defending themselves.

The Taliban claimed responsibility for the attack, but the coalition said it has uncovered no evidence to suggest that the insurgency was behind it.

"At this point in the investigation, it appears that the gunman was acting alone," the coalition said. "Beyond that, no Taliban connection with the gunman has been discovered. However, the investigation is still ongoing and we have not conclusively ruled out that possibility."