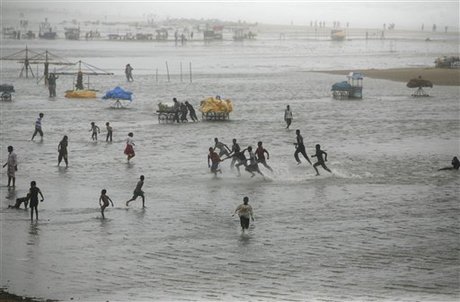 Torrential rains in the southern Indian state of Andhra Pradesh have killed at least 22 people and displaced tens of thousands of villagers over the past week, an official said Monday.

"At least 22 people have died and thousands have lost their houses. The rains have damaged all the standing crops in the coastal region," he said.

"The unseasonal rainfall has destroyed our crops and our entire field is submerged in water," Arku Rajaipa, a farmer in Guntur district, one of the worst-affected regions, told a local TV news channel.

"We will have to depend on the government for food the whole year."

The Andhra Pradesh state government said in a statement that it had handed out 100,000 food packets.

All trains were suspended from the coastal cities of Visakhapatnam and Vijaywada, a major transit route in the region.

The meteorological office has forecast more rain, and people from low-lying areas have been advised to head to shelters.

In September this year two million people were forced to flee their homes in the northeastern state of Assam after floods triggered by heavy monsoon rains.