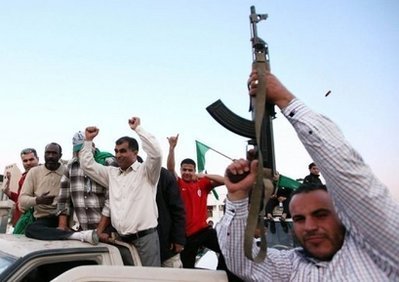 The Libyan opposition Transitional National Council (TNC) on Saturday rejected calls for talks by strongman Moammer Gadhafi, saying he had no role to play in the north African nation's future.

"The time for compromise has passed," said Abdul Hafiz Ghoga, vice-chairman of the transitional council that has shaped itself into a parallel government in the rebel-held eastern city of Benghazi.

"The people of Libya cannot possibly envisage or accept a future Libya in which Gadhafi's regime plays any role," he added.

Ghoga's remarks came hours after a defiant Gadhafi vowed not to quit power in Libya but called for talks to end the conflict, even as his forces pressed their offensive against the key rebel-held port city of Misrata.

In an early-morning speech on state television, the Libyan leader said NATO "must abandon all hope" of his departure," adding that "between Libyans we can solve our problems without being attacked."

The veteran strongman insisted that the rebels battling his forces "are terrorists who are not from Libya, but from Algeria, Egypt, Tunisia and Afghanistan."

The TNC, in turn, says Gadhafi is using foreign mercenaries to fight them.

"Gadhafi's regime has lost all credibility. It has repeatedly offered ceasefires only to continue violating basic human rights," Ghoga said.