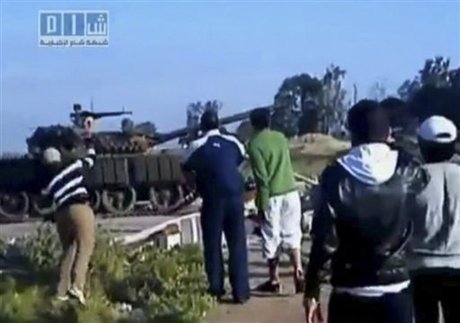 Syrian army troops backed by tanks and three helicopters on Saturday took a prominent mosque that had been controlled by residents in a besieged southern city killing four people, a witness said.

The operation in the town of Daraa came a day after President Bashar Assad unleashed deadly force to crush a months-old revolt, killing at least 65 people, mostly in the border town.

Daraa resident Abdullah Abazeid said the assault on the mosque lasted 90 minutes during which troops used tank shells and heavy machine guns. Three helicopters took part of the operation dropping paratroopers on to the mosque itself, he said.

The Omari mosque, in Daraa's Roman-era old town, had been under the control of the residents.

Daraa is the heart of a six-week-old uprising against the government and has been under siege since Monday when the government first sent in tanks to crush the daily demonstrations.

Abazeid said that among the dead was Osama Ahmad, the son of the mosque's imam, Sheik Ahmad Sayasna. The other three were a woman and her two daughters who were killed when a tank shell hit their home near the mosque, he said.

In the early hours of the morning, military reinforcements poured into Daraa, including 20 armored personnel carriers, four tanks, and a military ambulance, a resident of the city told The Associated Press.

The head of the Syrian Observatory for Human Rights, Rami Abdul-Rahman, said 65 people were killed Friday. with 36 deaths in the Daraa province, 27 in the central Homs region, one in Latakia and another in the Damascus countryside. Total civilian deaths since the uprising began has reached 535, he said.