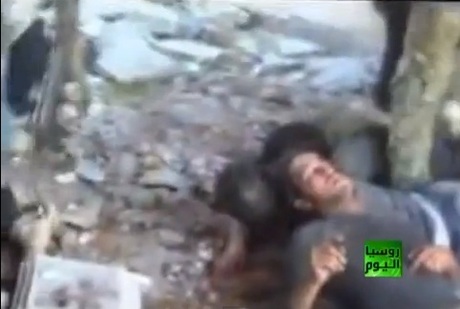 Russia's state English language channel Russia Today (RT) scored one of its biggest scoops by interviewing Syrian President Bashar Assad but its coverage of the crisis has come under increasing scrutiny over alleged pro-regime bias.

Assad dramatically used the exclusive interview with the Kremlin-funded channel to pledge "to live and die" in Syria, days after RT was criticized by British television watchdog Ofcom for lack of balance in one of its news broadcasts on Syria.

But RT -- which has the slogan "Question more" and was launched in 2005 in a bid to promote Russia's viewpoint globally -- accuses Western media of a bias towards the rebels.

"We definitely see a lot of bias in the mainstream media coverage of events in Syria," the channel's editor-in-chief Margarita Simonyan told AFP by email in answer to written questions.

"Most outlets have taken a decidedly pro-rebel position and often choose to ignore the absolutely devastating atrocities and acts of terrorism committed by the rebel army," she said.

RT in its coverage gives a "platform to both sides of the conflict, we don't gloss over the facts for the sake of an agenda or a preconceived narrative," she said.

RT's position is closely in line with official Russian foreign policy which has long shown suspicion of the rebels while refusing to halt cooperation with the Assad regime.

The Assad interview that aired last week was the first time the isolated leader had spoken to international media since an interview with German channel ARD in July.

He earlier spoke to Russian state channel Rossiya 24 in May and last December to U.S. channel ABC, where he seemed to struggle for words under aggressive questioning.

Interviewer Sophie Shevardnadze revealed that Damascus insisted the interview be filmed as live and shown in full with no subsequent edits, in contrast to the ABC interview.

Speaking on RT, Shevardnadze said she felt Assad had been "demonized by the press" and slammed ABC for what she called "completely distorting" editing.

Asked to comment on accusations of pro-Assad bias, Simonyan told AFP that the day after the interview, RT aired interviews with a leading Syrian National Council member and a rebel spokesman.

"That's the definition of balanced reporting," she said.

But Britain's Ofcom in a report published November 5 criticized RT for a July news item on Syria that it said lacked "sufficient alternative viewpoints and "due impartiality".

The item had a commentator blaming the opposition for the failure of international negotiator Kofi Annan's peace plan. Somewhat bizarrely, this was followed by an item on pro-government Syrian actors.

"We were neither fined, nor censured by the Ofcom in any way," Simonyan said.

After its founding in 2005, RT has used deliberately controversial stunts to position itself as mould-breaking.

It aired a talk show hosted by WikiLeaks founder Julian Assange and ran ads showing Stalin with the slogan "Stalin wrote romantic poetry. Did you know this?"

Aimed at an international audience, RT faces far greater scrutiny than domestic channels, whose approach to the Syrian conflict is openly partisan.

Newsreaders routinely describe opposition forces as "bandits" and "terrorists", just as they describe separatist militants in the North Caucasus.

"The more the conflict develops, the more one-sided and propagandistic the coverage of it on Russian television, the more unconditional the support of Assad," said political analyst Andrei Piontkovsky.

"Russian television covers the conflict in Syria badly, reflecting only the official point of view on the conflict," said Alexei Malashenko of the Carnegie Moscow Center.

"It plays the card that 'Yes, this is a civil war, but 'our guys' are better than the 'enemies.'"

lol its a joke, i never thought i would see the day where you have more biased coverage then CNN. Now, when ever I see a youtube news video witha green logo or the words "press tv" , I just automatically skip it. It is like the entire thing is edited in Iran before release.

Hi, all the time i used to check webpage posts
here in the early hours in the break of day, as i enjoy to learn more and more.

Why viewers still make use of to read news papers when in this
technological world everything is accessible on web?