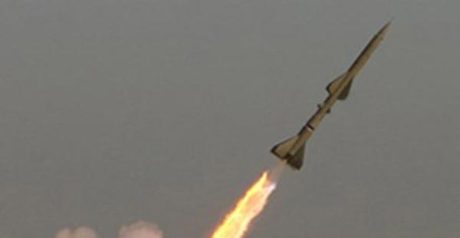 The Iranian-made Fajr 5 rocket fired at Tel Aviv by Palestinian militants has a far greater range than the home-made Qassam rockets used by Hamas in Gaza, but neither are very accurate, experts say.

Fajr 5 rockets can be fired from the back of a 6x6 truck and can hit targets up to 75 kilometers (46 miles) away, according to London-based defense analysts IHS Jane's.

This compares to a range of between four and 13 kilometers for the Qassam rockets normally used by Hamas, added Douglas Barrie, senior fellow for military aerospace at the International Institute for Strategic Studies (IISS).

Manufactured by Shahid Bagheri Industries of Tehran and marketed by Iran's Aerospace Industries Organization, the 6.5-meter-long (21-foot) Fajr 5 rockets are used by the Iranian army, according to Jane's Ammunition Handbook.

They are also thought to have been supplied to Hezbollah.

Lebanon's most powerful military force "received long-range rockets in 2006 that they designate as the Khaibar-1. It is suspected that these may have been Fajr-5 rockets", the handbook said.

The 333-mm caliber rockets weighing 915 kilos (2,013 pounds) can be fired every four or eight seconds and the standard warhead contains 90 kg of explosive ignited by a nose-mounted impact fuse.

But the rockets lack the precision of a guided missile.

"Fajr 5 is a rocket rather than a missile. It is not guided as such. That is how we differentiate it," said Gareth Jennings, managing editor of IHS Jane's Missiles and Rockets.

Barrie also told AFP: "None of the rockets has any form of terminal guidance and lack accuracy."

He explained: "The Qassam family of rockets (there are several versions) are small, and pretty basic designs of a much smaller size than the Fajr, with therefore a far shorter range.

"The Qassam 1 is generally considered to have a maximum range of around 4km, the Qassam II has a range of up to 10km and the Qassam III around 13km. Explosive warhead weight varies from 1-10kg depending on the Qassam version.

"The Fajr by comparison is much larger, heavier, and with greater range. The Fajr 3 has a range believed to be in excess of 40km with that of the Fajr 5 greater than 70km."

Basically, this rocket is blind and can be easily intercepted by the iron dome. Useless tech?

The Israeli only fire the iron dome when the identified rocket has a trajectory that threatens civilians or installations. Otherwise they let the rocket fall in the fields.

"They are also thought to have been supplied to Hezbollah".....the Hezz are going to get us bombed again. We will have to pay and clean up their mess again.

Rockets are harder to intercept then missiles, they dont do as much damage, are inaccurate & have no set trajectory. Iron dome will be much more useful against serious game changer missiles like the guided shahab.

The lighting candle of everlasting peace will come from Zion and those haters will see and kneel in front of him(Messiah)........ eternal peace from God is knocking........Best is to prepare for it.

The lighting candle of everlasting peace will come from Zion and those haters will see and kneel in front of him(Messiah)........ eternal peace from God is knocking........Best is to prepare for it.