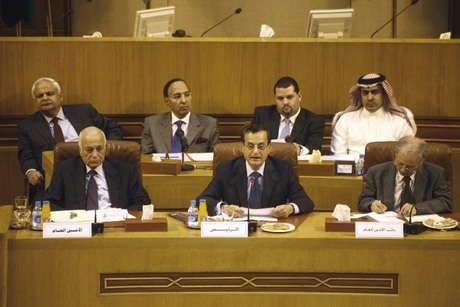 Foreign Minister Adnan Mansour urged on Saturday Arab nations to adopt strict political and economic measures against Israel, in response to the Israeli assault on the Gaza strip.

“The Arab countries must freeze their contacts, withdraw their ambassadors and suspend agreements with Israel,” Mansour said during an Arab Foreign Ministers emergency meeting to discuss situation in Gaza at the headquarter of the Arab League in Cairo.

He pointed out that “the Palestinian people are demanding the Arabs to courageously stand against the assault.”

Israel's harshest Gaza operation in four years began on Wednesday and was followed by fresh Israeli air strikes, as Palestinian militants inside Gaza responded with rocket fire prompting the Arab League to hold an urgent meeting for Foreign Ministers in Cairo.

“Israelis must be prosecuted in international courts for committing war crimes against Palestinians,” Mansour added.

40 Palestinians have been killed and more than 390 injured since the beginning of the attacks, while three Israelis have died and another 18 were injured after Hamas rockets targeted different regions of Israel.

The FM called on “European and international allies” to have a strong stand that condemns explicitly and forbids Israeli attacks on Gaza.”

Mansour also urged Palestinian President Mahmoud Abbas to submit a bid to the General Assembly for non-state membership of the United Nations later in November.

The move is fiercely opposed by Israel, and Israeli ministers have reportedly already met to discuss potential sanctions against the Palestinians if they proceed with the bid.

As if the Arab world would follow this illegitimate government of our, especially the recently freed Arab nations such as Tunisia or Egypt. Dream on Mansour. (whom isn't from Sour but Da7ye)

jajajaja It took me a while to understand the joke, inta mansour? la2, ana loser min Dahye.

Very passionate speech Minister Mansewer so passionate I'm tearing up in here, almost as passionate as your speeches defending the our magnificent president Bashar's right to murder Syrian babies.

With all due respects to the Foreign Minister of the Lebanese Republic.
I think that you should first make sure that things at home are running smoothly before trying to change things in other parts of the region.

F.T how about calling on Fayez Karam to 'freeze contacts' with israel first lol? he is free after 1 year of jail term, just 1 year after committing treason, intu kil 3umrkun traitors. Whereas you killed wesam 7assan the true patriot who caught fayez karam. Death to Aoun and charl ayoub, we we will take revenge.

Who listens to that guy. What an idiot mouthpiece he is.

Ya Mansour execute the orders of your President you doormat zelous pri.k! Israel has killed less palestinians that the bloody baath regime on Syria it's own citizens over one air raid !
Iran and Syria are throwing the Hamas palestinians into their butchers' hands! So much for the visit of the Emir of Qatar to bring them back to the path where they should belong !

With all due respects, you should get your facts right about me before coming out with your incorrect statements.

I wasn't one to really agree with FT, but he's right. You re pretty much an Israeli cheerleader. Yesterday after reading your comments I was truly ashamed that you are Lebanese.

Sorry old chap, I'm not Lebanese either. I am british who has studied Middle East History, Georgraphy and Politics for many years.

Why can't you write in English on an English language web site ?

FT I dont understand how a Lebanese person defends and cheer for the jews.

Nobody defends and cheers for the jews, but just because I don't like the Jews, I am not going to like Mansour!!!!!! the enemy of my enemy is not my friend!!!!!!

Mansour is still a Syrian tool--close to 50K have been killed in Syria and he has barely spoken a word. 50 killed in Gaza, and suddenly he is up in arms. Dude, give me a break.

Yes mansour is a piece of sht. Yes bashar should leave n the Ba'ath party burned to the groung. We agree.

Now 60+yrs later, what can we say about this European Jewish occupation? Do u have any opinions bout that?

"European Jewish occupation"
Please look up in your history books as to how many Jews were living in the Holy Land before 1948.
Add to that the 850,000 Jewish refugees who were expelled from the Arab States from 1948 onwards.
Add to that the natural growth rate for children and grandchildren of those 850,000,
and you can see that there are millions who have nothing to do with Europe.

remind me when the FSA acquired M28 choppers or good old MIG airplanes.

they are different only in those who want to rationalize the differences between the two. Lest you forget, Bashar is using jets, tanks, and other equipment against his own people, who don't have tanks or jets to counter with. The only difference is that you don't have some militants throwing random missiles into fields. Actually, Bashar's own troops do the random shelling thing launching them into nearby countries.

Now, why don't you try to differentiate the difference again, without sounding so hypocritical?

Is there a single arab ambassador in Tel Aviv?

Jordanian. Usually an Egyptian as well.

you will kiss syrian rebel boots in 2013 inta and aoun taba3ak and you will ask for forgiveness. MARK MY WORDS

Israel has every right to defend its citrizens from Hamas rocket attaks. The US, Germany, Ashton and others have recognized this. Israel is using surgical strikes and is killing mainly militants. Hamas has killed only civilians. When Hamas agrees to stop firing rockets at Israel this conflict will end -- but any series of rockets will reignite it.

There are more civilians killed in a day in Iraq and Afganistan from bombs than in the 3 days of war in Gaza. You anti-Zionists fail to address the reality. If rockets were being fired into Leb you'd all be sqealing. And the "resistance" seems to have lost its powder -- throwing its Pals under the bus.

@ Flamethrower, Mansour should be a better foreign minister instead of just condemning what is happening in gaza, he should condemn also the shells that fell inside Lebanon from the Syrian army. Lets not protect him too shall we... His allegiance is well known and it is not to Lebanon, he doesnt even know how to speak properly other languages.. what a shame... Its sad to see but M14 is taking advantage of the israeli attacks to attack M8 again as M8 took advantage of jumblat beeing scared of Hezbollah and take power in lebanon. Lets not be fools, no camp's allegiance are to Lebanon. One is to KSA, USA and Israel, and the other to Syria and Iran. When we will have a foreign minister that is qualified and condemns EVERY UNJUST ACTION against Lebanese territory or other poor people beeing bombed, this will be a real foreign minister

@ Flamethrower, of course we should in the same time condemn people that love attacks from Israel to poor palestinians innocent people, no real lebanese would qualify of just what is happening in Gaza even if we were fighting the palestinians in the civil war . This is something and the past is something else. We should not mix events. We have suffered and we know what it is receiving shells on our heads. Sadly some people take please in whats happening. The arabs dont care and Morsi will not lift a finger because at the end, he has been brought by the USA and all top moubarak officials are still by his side. All the arab world is a mess and each and everyone of those countries only cares for himself not others.

as a minister of foreign affairs he is right to criticize what israel is doing, but as a double standard M8 syrian bootlicker he dares not call for assad to stop killing his people: that makes him totally unfit for this job like the rest of M8 cabinet by the way...

"aiding salafists like asir to plunge lebanon under a shadow"
like M8 helps hezbis to implement the iranian policy and be ready to attack israel when tehran tells them...
"chose to sabotage gvt, undermine parliament"
like M8 did when they blocked the cabient by resigning and issuing a fatwa to forbid any shia to replace those who resigned and when they shut down the parliament...
"spill the syrian conflict"
just like M8 is doing by capturing and sending back to syria opponents to bashar and doing nothing when syria bombs lebanon...
"for simply being liars and wimps" :
all the above shows how hypocrit M8 is, who is the liar here? lol!

see M14 just imitates the example set by M8 so do not complain and whine because they are using your methods! LOL!!!!!!!!!

Exactly what contacts with Israel does Foreign Minister Mansour have?