Jewish Settlers Use Tourism to Draw Israelis to West Bank 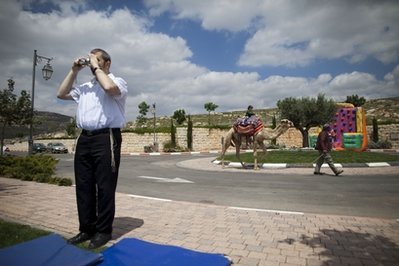 Jewish settlers are promoting tourism to draw Israelis who might otherwise never set foot in the West Bank, an occupied area Palestinians want as part of a future state. Proponents hope that drawing visitors will help increase support for retaining the territory, while critics say the tourism campaign, like Jewish settlements, is a foothold that stands in the way of making peace.

The Binyamin region — named for the Hebrew tribe of Benjamin, thought to have lived here in biblical times — is a short drive from population centers in Tel Aviv and Jerusalem; its boosters call it "the heart of Israel." Ancient ruins and wine routes line the roads here leading to the Jewish settlements and Palestinian villages that exist, uneasily, side by side.

The visitors center was established last August in response to an increase in visitors to the region and with hopes of drawing more, manager Yaela Briner said. Since then, Briner said some 5,000 tourists have passed through, half of them Israelis.

Some of the 300,000 Israeli settlers in the West Bank are looking to tourism as a way to help normalize Israel's hold on the territory it captured in 1967. They tout the region's proximity to urban centers, its biblical history and its idyllic scenery as a way to paint a positive picture for Israelis who might frown upon Israel's settlement enterprise, the country's most divisive political issue.

"We have a moral interest for Judea and Samaria to be toured by Israelis who for various reasons still don't see it as a place to tour," said Dani Dayan, head of a settler umbrella group, referring to the West Bank by its biblical names.

Attacks against Israelis still occur in the West Bank. Most recently, Palestinian militants stabbed five family members to death in their homes in an isolated settlement.

Still, the relative calm of recent years has made tourism a possibility. The area offers a plethora of sites, many of them of biblical significance. The settlement of Shilo, for instance, was a stopping point for the biblical Tabernacle before it went to Jerusalem.

Natural springs and reserves dot the region and boutique wineries are popping up, attracting both religious and secular Jews. While no records are kept as to how many Israelis visit the West Bank, settlers say the numbers are growing, spurred by an aggressive marketing campaign.

Settler representatives attend tourism fairs and extol the wonders of the region to travel agents. They have launched campaigns targeting Israelis, appealing to the West Bank's Jewish history. One project titled "Every Jew's Story" had billboards up in cities across Israel, depicting grinning children dressed as famous biblical characters, urging Israelis to return to their roots with a visit to the West Bank. offering tours to different sites.

For those Israelis uninspired by the biblical connection, settlers have appealed to adventure-seekers by installing a 400-yard (meter)-long zipline, or to nature-lovers with greater access to springs. The Binyamin visitors center tailors its tours to the interests of the traveler, focusing on history, wine or nature.

The settlers might be inspired by the example of the Golan Heights, an area Israel captured from Syria in 1967. The nature reserves and wineries of the Golan have made it a major tourist draw, and polls show a majority of Israelis oppose a withdrawal there.

The Golan has been largely quiet for the past four decades, but the volatile West Bank does not occupy a similar place in the Israeli consensus. Polls show a majority of Israelis would cede most or all the area in return for peace.

The Israeli government has also taken steps to promote tourism in the West Bank, offering to protect certain historical sites there and pledging to send schoolchildren on field trips to a disputed holy site in Hebron, one of the West Bank's most explosive flashpoints.

On a recent rainy morning, a handful of Israeli visitors meandered around the Inn of the Good Samaritan, a museum housing dozens of archaeological artifacts from around the West Bank.

Shoshi Leibovich, a secular Jew visiting from nearby Jerusalem, said she seldom travels to the West Bank but was drawn by its tourist attractions.

"Judea and Samaria is where our forefathers lived. It's interesting. It doesn't need to be political," she said, peering at a mosaic extracted from an ancient synagogue floor.

Tourist infrastructure has expanded in order to accommodate those visitors, said Dror Etkes, an anti-settlement activist, pointing to a soon to be opened holistic healing retreat nestled between desert hills near the biblical town of Jericho. Alongside the red-tiled roofs of scattered West Bank settlements are a growing number of inns and restaurants — all which eat into land desired by the Palestinians as part of a future state.

The Israeli Tourism Ministry said it doesn't actively promote the West Bank region as a tourist destination for Israelis, though Christian pilgrims around the world frequently head to the Jordan River for baptism ceremonies.

Israeli government spokesman Mark Regev said Israel supports maintaining historical sites in the West Bank because "irrespective of one's political perspective, the fact is these are sites that are of great importance historically and culturally."