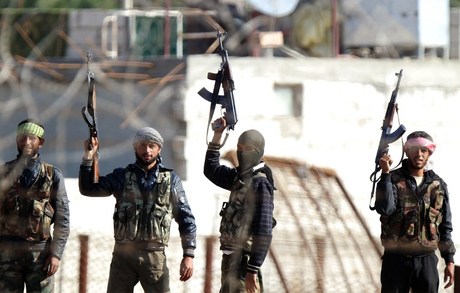 Hundreds of Kurdish militiamen clashed on Thursday with mainly jihadist rebels who had seized much of the Syrian border town of Ras al-Ain from government forces, a watchdog said.

It was the latest in a string of drives for control of mainly Kurdish inhabited areas of the northeast and northwest that neighboring Turkey fears has given succor to the rebel Kurdistan Workers' Party (PKK) it has been fighting for nearly three decades.

The Democratic Union Party (PYD) has close links with the PKK, which has been fighting for self-rule just across the border in southeastern Turkey since 1984 in a conflict that has cost more than 40,000 lives.

The PYD insists its fighters are entirely Syrian but Washington has backed Ankara in insisting that Syria will not be allowed to become a rear base for the PKK in the face of the 20-month uprising against President Bashar Assad's regime.

The standoff between the Kurds and the Arab-led rebels -- most of whom the Syrian Observatory for Human Rights said were drawn from hardline Islamists opposed to the new opposition coalition recognized some Arab and Western states -- highlighted a growing dilemma for the rebels' supporters.

Some 200 fighters from the al-Qaida loyalist Al-Nusra Front and 100 from the allied Ghuraba al-Sham advanced on Ras al-Ain, backed by three tanks they had captured from the Syrian army, the Observatory said.

The Ghuraba al-Sham called in a video posted on the Internet for Islamist volunteers to flock to Ras al-Ain for a drive on the provincial capital Hasakeh.

"We of the Ghuraba al-Sham battalion call on the (mainstream rebel) Free Syrian Army and the mujahedeen to advance towards Ras al-Ain. Increase our numbers so that we can free the city of Hasakeh," an unidentified rebel commander said in the footage, standing among some 50 fighters.

"And we warn all those who stand in the way of this revolt... especially the PYD and the PKK, and any other armed group, against taking any action that contradicts with the path of the revolution," he added.

The rebels were faced by 400 Kurdish militiamen in the northeastern town which has already been largely deserted by its residents, thousands of whom have poured across the border into Turkey, the Britain-based watchdog and residents said.

"Most residents have fled, and the few who remain are living in fear, in poor humanitarian conditions," one of them, Abu Mohammed, told Agence France Presse.

On Monday, at least 34 people were killed in fighting between the mainly Islamist fighters and the Kurdish militia. Most of the dead were on the rebel side.