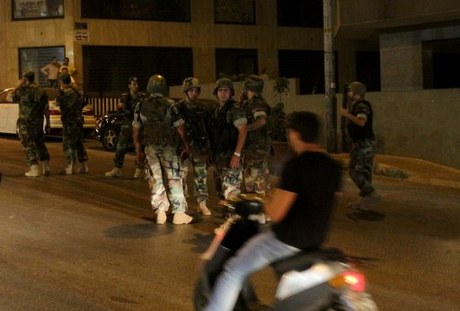 The army on Friday arrested Syrian nationals who were preparing an explosive device with the aim of detonating it at an Ashoura procession set to be held on Saturday, media reports said.

"Army intelligence agents on Friday evening arrested five Syrians at a house in the Nabatiyeh neighborhood of al-Maslakh while they were preparing a 300-gram explosive device with the aim of detonating it during the Muharram (Ashoura) 9 procession that will be held tomorrow in the city of Nabatiyeh” in southern Lebanon, al-Jadeed television reported.

Army troops cordoned off the house and the detainees were taken to the headquarters of the army Intelligence Directorate in the southern city of Sidon, the TV network added.

Later on Friday, state-run National News Agency said “five people were arrested in the Nabatiyeh neighborhood of al-Maslakh as they were plotting for a subversive act in the area.”

“They are being interrogated by the army,” the agency added.

The army, the Internal Security Forces and members of Hizbullah and AMAL Movement are taking strict security measures in areas witnessing Ashoura ceremonies and processions.

The ten days of Ashoura are the most important days in the Shiite religious calendar.

The last day of Ashoura, Muharram 10 in the Islamic lunar calendar, marks the climax of mourning for the death of reverred Imam Hussein bin Ali -- the grandson of the Prophet Mohammed – at the hands of the army of the caliph Yazid during the Battle of Karbala in 680 AD.

The FSA said it would target the Hezz for sending mercenary killers to Syria. This may be the tip of the iceberg.

are u for real?
are these syrian thugs more important than your own people?
i think you have to get your priorities checked. and all of your co-M14ers as well.

Syrian thugs? Who are more thugs than you lebanese? 3anjad.. who? Perhaps the christian terrorist group in africa called the lords army... or some drug cartels in mexico... but then again, those drug cartels have lots of soldiers who are lebanese..

More glue I see :P. I'm sure it all plays out well in your mind. You love control from Irani's go there then.

IF you were truly Lebanese you wouldn't bother with HA or the whole Wahabi nonsense.

The suni she3a war in leb has started in 2005, and given the irresponsible involvement of hizbala in syria it is a matter of time before we see suicide attacks in beirut, im just being realistic, it is too naieve for hizbala to think that business will stay as usual following the demise of the alawite regime in syria, too naieve..

Too naive to think anything in Lebanon will ever change. Business will always be as usual in Lebanon, whether Bashar will survive or not. HA is a power to reckon with. They are not going anywhere soon. Stop hoping and dreaming about your vision of Lebanon. HA didn't hurt Israel with its missiles. It was HA fighters who did the damage.

Jc you should address this to HA followers. The sunis in lebanon are not going anywhere soon and assasinating their leaders to ensure hegemony over lebanon will only bring HA community tragedies and have a taste of their own medicine. You have totaly missed my point lol. I do not have hope or dreams i rather have a realistic nightmares materliazing slowly but surely: suni fundamentalism (armed following regime demise in syria) against HA fundametalism and bye bye lebanon.

Hezbollah brought this onto themselves ...

Maybe the explosives weren't meant to blow up anyone? It was intended to be used in their next movie, part of the pyrotechnic show.

Of course I'm joking, I'm using of Aoun techniques for deflecting attacks in a really twisted way. Oh well, punish those Syrians for this. They need the explosives for damascus and the presidential quarter.

Nobody thought to accuse the Assad regime itself to cause religious strife in Lebanon? Did u guys forget about the Samaha Mamlouk jamil el sayyed case? Assad is not concerned or worried even to kill his own allies just to cause a civil war in Lebanon! I personally think these syrians belong to the Assad regime and are meant to cause Chiite and Sunni strife!

Glad they got caught, these were the ones I've been warning about for some years. Double TAKBEER!

did you bark as well when terrorist cars DID blow up killing your prime minister in 2005 and wesam 7assan in 2012 not to mention countless other examples of 'clean' assasinations?. Religions are all feritales and fundamentalisms are all bad.

you dont know half the stories idiot. Stick to lebanon and im sure iranian agents in pakistan are not angels either.

name: killer instinct/logo: hezbis flag : you ve summarized it all!

FSA or HA, both external influences, bringing their issues into Lebanon. Lebanon for the Lebanese.

All terrorists must die, no matter their nationality

Occupation soldiers INVITED by maronites that is.