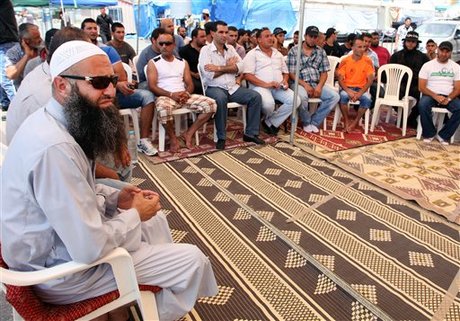 Salafist cleric Sheikh Ahmed al-Asir is scheduled to stage a rally in the southern city of Sidon on Sunday, reported Ad Diyar newspaper on Saturday.

It said that the protest will be held to commemorate those killed during the recent unrest in the city.

He also warned against the appearance of gunmen on the streets of the city.

“A peaceful demonstration does not lead to any blocking of roads or the deployment of gunmen,” he explained.

The army and security forces will deploy heavily in the city to prevent any unrest, he stressed.

“Anyone brandishing arms will be arrested and we will not allow anyone to tamper with civil peace,” declared Charbel.

A clash broke out on Sunday between Asir and Hizbullah supporters in November.

Two of Asir's companions and an Egyptian national died in the unrest that was a product of sectarian tensions in Sidon.

The Army Command had previously warned that its troops will deal “firmly and forcefully with any gunmen who appear on the streets regardless of their affiliation.”

why does lebanon breed so many nutcases?

Just like an abadoned neighborhood brings in all sort of criminnals, so will a country whose borders are open, institutions are weak, and traitors are many.
May God help us to restore what once was a beautiful place.

Ye3ni common sense, does it really make any sense that one lebanese group would stay armed to the teeth, dictating politics, assasinating dissent and people who bow down and accept indefinitely. Akeed such actions would breed fundamentalism, ba3d ma chifit chi, the worse is yet to come, this is just an appetizer. Hizbustan actualy survives on chaos, i.e it is not in against their interest for lebanon to transform into militia land again, that way they can ensure their control of the she3a sect in the name of defending them against other lebanese (now that israel disappointed them and left lebanon).

Unfortunately, Lebanon is the recycle bin of the Middle East.

He is suspicious yes but hezballah and amal thugs are worse. Why isent Charbel disarming those thugs? If he did assir wouldnt be able to do whatever he has planned. (His meeting at the US embassy is extremly suspicious). The US keeps flirting with such fakes as assir (and bin laden etc) when they have a common enemy and as a result innocent people get killed. In the end fakes like assir end up betraying both their US ally and their own Muslim people. As long as hezballah and amal exist as militias, lebanon will keep producing assirs and thus becoming an easy target for the US, saudi arabia and other ill-intenioned states/regimes who want to settle scores for the moment but never finish their job and leave a mess behind. Iran finished its job with hezballah thats why they took the power. The saudis never finish the job, just look at the FSA, they gave them some weapons but not enough to topple bashars terror reign. And the result is continued conflict but no victory for either side.

Amal is worse? Interesting... Salafi's are religiously indoctrinated with the takfiri ideaology i.e. if you were smart enough you would realize these people religiously refer to Shiites, Christians, and Jews as infidels. You didn't get that memo or were you too blinded by your hatred to see that? You guys are something.

happy to hear at least one person of the 14th March camp think straight. question: if you do believe in what you say, why then do you (not you in particular) obsess about Hezb (alone)? Why dont you address the problem of the salafis at the same level or ever more?

These are purely racist statements im sorry, you are uneducated about islam and islamic movements and you are too unaware of how many variables there are in the equation. What applies to one movement in one country does not apply to the other. The muslim brotherhood of Syria under the SNC, elected a christian to represent them i.e george sabra. The salafi movement in lebanon is not taliban my friend and im 100 percent sure you never sat down with one of them and engaged in a dialouge cause you would b suprised. Not that i condone any religous party as they are all bad news, seperation of church/mosque and state is the true democracy, but to speak about shoes and people is very racist and inhumane.

@ free mind: when did we ever hear about salafis in lebanon?? was it post or pre 2005?? is it not the arrogance and evil that hezbustan is doing to the lebanese fabric, assasinating hariri, 3eedo, 7assan ie the moderate suni voice, treating people like 3rd class citizens, selective application of laws etc. You have to deal with the root of the problem. The suni community would take care of these folks if there were justice in lebanon. Unfortunately the way things are going i am very pessimistic.

the1phoenix, what makes you think shiites are less evil than salafis? Did you not see what their militias did in iraq? The sadr and badr shia militias comitted horrible crimes in the name of their religion against other religions. Its just that in general, shiites focus their enemity on Muslims (they exist in countries where muslims are the majority and they are the minority), but when they live among other religions they focus their enemity on them by first showing their power and trying to take what they want, if people object then they show their brutality on them. Just ask the christians of lassa and many other christian towns in lebanon that have had their share of shiite extremism and thats nothing compared to what they would do if they got the chance. I think you have forgotten that many christians in lebanon are displaced thanks to shiites who have stolen our towns and ethnicly cleansed us.

I'm very disappointed by Assir, he tried to instrumentalist the Palestinians in the Ain al Helweh camp. That's where he got he gunmen from. I always said, the day he loses my support is the day he carries weapons like Hezbollah, and he did. As chouf3 said, one cancer is enough, we don't need a second one.

Thats not entirely correct. He did seek support from ain el helwi but it was from jund el chem group which is a lebanese salafi militia based in ain el helwi. Other than jund el chem, he had sidonian youths that joined as well. Thats his gunmen. The more religious among mustaqbal supporters are pro assir, while the less religious supporters of mustaqbal tend to see him in negative light but not as much as the lebanese arabists in saida who hate his guts. Its not black and white.

what about armed men outside of Sidon?

Same should apply to all within our borders. But if the Government is unable to disarm one group presently, does not mean we should open the gates of hell to all.... if we do that then we will lose Lebanon forever. One wrong should never be used as justification to generate other wrongs.

if a minister is going to make such statements he should be mroe clear, he cannot target one group and forget about others...if our government isn't able to do that then it should not exist and should resign.

asir exists because hezbis exist. reaction-countereaction, nothing strange in his growing influence. it s mathematical. as long as hezbis remain arrogant and brandish their weapons blackmailing a whole country, it ll get only worse...

correct analysis as long as it does not lead to the conclusion that we must support the likes of him. To the contrary we must shut him and others like him down fast to keep the focus on Hezb and Palestinian arms and eventually (hopefully) disarm them and bring their arms under the command of the army. If we allow Assir and others like him take a hold and mushroom throughout our cities, that will spell the end of Lebanon.

As long as lebanon is occupied by shiites, then this is expected. People have had enough. Shiites were a small minority not long ago and now all of a sudden by having 30 babies each as well as taking in iranians, they are the single largest group by unfair methods. And they use their militia and their soldiers in the army to get their will. There is no justice in lebanon whatsoever.

Agree 100% with your analysis, but this does not mean we should ever allow other fanatics to mushroom within our landscape. I would rather deal with a large tumor in the body (which can be removed via surgery, radiation, or chemo), than deal with a cancer that has metastasized throughout the body (bone marrow, blood cells, and tissue). So deal harshly with these newbies until we find a solution to the existing tumors. You do not remove a cancer by injecting other kind of cancer cells in the body.

helicopter, you can't control the chain reaction, and dont you agree that people have been very patient? hariri murdered.. then the culprits are described as 'saints', ye3ni that by itself is not gona cause fundamentalism? get real.

Partially true bigjohn, but I disagree with the part regarding majority Sunni feelings regarding Hezb. Maybe it was so before the assassination of Harriri. But ever since then, the rift increased because of Hezb involvement and tactics to control Lebanon. Hezb actions/methods havve weakend the moderate Sunnis (Mustaqbal) and giving rise to idiots like Asir. I hope the tide will be reversed and the sooner Saad returns to Lebanon the better off everyone will be.

I think Ahmed al-Asir would be better living in Saudi arabia with his brothers and leave Lebanon alone. I can not believe that someone like him can block an entire mainroad and our beloved government can not do anything about it. By the way he looks very sexy with this sunglasses. he needs to change his outfit and wear a cut off white shirt and pair of jeans, it will match his sunglasses.