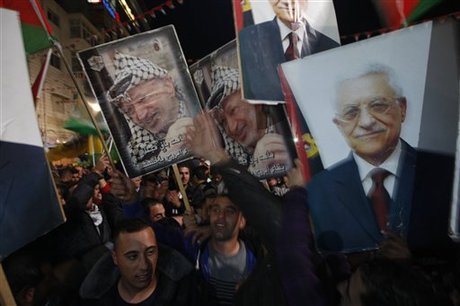 Palestinian president Mahmoud Abbas is due home from New York to a hero's welcome on Sunday, after the United Nations voted to recognize Palestine as a non-member state.

The main official event will be a celebratory rally and a speech by Abbas at his Ramallah headquarters, starting at midday (10:00 GMT).

He landed in Amman on Saturday and is scheduled to spend the night in Jordan, returning to the Israeli-occupied West Bank on Sunday morning.

On Thursday, the U.N. General Assembly overwhelmingly backed a resolution recognizing Palestine within the 1967 borders as a non-member observer state.

Israel lashed out in response, with an official on Friday telling Agence France Presse of plans to build 3,000 new settler homes in the West Bank including annexed east Jerusalem, without specifying exactly where they were to be located.

Asked to confirm media reports that the measure was a consequence of the U.N. vote, the official said: "it's true."

The reports said that part of the building would be in east Jerusalem but the official said only that "we make no distinction," between the city's east and west sides.

Arab east Jerusalem was captured by Israel with the rest of the West Bank in the 1967 Six Day War and later annexed in a move not recognized by the international community.

Israel considers all of Jerusalem as its "eternal, indivisible" capital, and does not view construction in the eastern sector as settlement activity.

The latest plan brought international condemnation, led by Israel's US ally, one of a handful of states to vote against the U.N. motion.

"In light of today's announcement, let me reiterate that this administration -- like previous administrations -- has been very clear with Israel that these activities set back the cause of a negotiated peace," Secretary of State Hillary Clinton said on Friday.

Britain, which abstained, added its voice on Saturday, urging Israel to reverse its decision and saying the plans would undermine peace efforts.

"The UK strongly advises the Israeli government to reverse this decision," Foreign Secretary William Hague said in a statement.

"I've said a thousand times that we want to resume negotiations and we are ready to do it," he told reporters in New York.

"We are not setting any condition but there are at least 15 U.N. resolutions which consider settlement activity as illegal and an obstacle to peace which must be removed," he said. "Why do (the Israelis) not stop settlement?"

Peace talks have been on hold since September 2010, with the Palestinians insisting on a settlement freeze before returning to the negotiating table and the Israelis insisting on no preconditions.

Can I assume that as soon as he gets back to Ramallah he is going to call for the opening of Peace Talks with Israel, or is it wishful thinking.
If anybody took notice, during his speech at the UN he did not mention the word "Israel" even once.