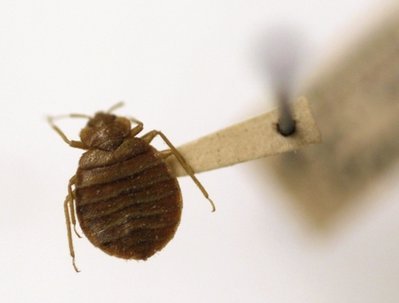 Bedbugs have not been known to spread disease, and there's no clear evidence that the five bedbugs found on the patients or their belongings had spread the MRSA germ they were carrying or a second less dangerous drug-resistant bacteria.

However, bedbugs can cause itching that can lead to excessive scratching. That can cause breaks in the skin that make people more susceptible to these germs, noted Dr. Marc Romney, one of the study's authors.

The study is small and very preliminary. "But it's an intriguing finding" that needs to be further researched, said Romney, medical microbiologist at St. Paul's Hospital in Vancouver.

The hospital is the closest one to the poor Downtown Eastside neighborhood near the city's waterfront. Romney said he and his colleagues did the research after seeing a simultaneous boom in bedbugs and MRSA cases from the neighborhood.

Five bedbugs were crushed and analyzed. MRSA, or methicillin-resistant Staphylococcus aureus, was found on three bugs. MRSA is resistant to several types of common antibiotics and can become deadly if it gets through the skin and into the bloodstream.

Both germs are often seen in hospitals, and experts have been far more worried about nurses and other health care workers spreading the bacteria than insects.

It's not clear if the bacteria originated with the bedbugs or if the bugs picked it up from already infected people, Romney added.

The study was released Wednesday by Emerging Infectious Diseases, a publication of the U.S. Centers for Disease Control and Prevention.