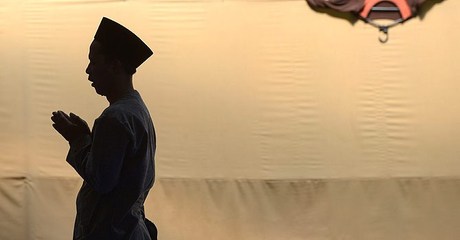 Condemned as heretics, a community of around 200 Shiite Muslims have for months lived as pariahs in a sports hall, driven from their Indonesian village after a deadly clash with Sunnis.

In August, a mob of hundreds armed with sickles and swords hacked a Shiite man to death and torched more than 30 houses, forcing villagers to seek refuge at the sports hall.

Since then they have slept on thin mattresses surrounded by flies, sharing few communal toilets and eating modest meals at the Sampang district indoor tennis courts in eastern Java.

Now their future appears more bleak than ever.

Last month, the government cut their free food and water supplies, citing lack of funds. To add insult to injury, religious and village leaders demanded they convert to Sunni Islam or be expelled from the district.

"We don't want to live like refugees. We want to return home as soon as possible, to the village where we were born. But it seems our fate is not for us to decide," Suleha, a 22-year-old housewife, told Agence France Presse.

"Aren't we all Muslims? We believe in the same god, the same prophets, the same Koran. So why can't we get along and live together in peace?"

Indonesia, the world's biggest Muslim-majority nation of 240 million people, is hailed as a bastion of moderate Islam, but rights groups say religious intolerance is on the rise amid concerns that too little is being done to address it.

The U.N. High Commissioner for Human Rights Navi Pillay warned last month that Indonesia risked losing its culture of diversity and tolerance "if firm action is not taken to address increasing levels of violence and hatred towards minorities and narrow and extremist interpretations of Islam".

According to a report by the Setara Institute of Peace, a local rights watchdog, 308 incidents in the first half of 2012 were recorded against religious minorities, including Christians, minority Muslim sect Ahmadis and more recently, Buddhists.

The August attack in Sampang was the worst-ever against minority Shiites in Indonesia, according to Setara.

Tohir, 50, saw his brother die and bears physical and emotional scars from the attack.

"My stomach feels sore all the time and I still get nightmares," Tohir said, writhing in pain, showing a long scar on his back and stomach where he was slashed with a sickle.

"They threw rocks and shouted 'Burn the Shiites' houses' and 'Kill the Shiites'. My brother tried to calm them down, but they killed him. I rushed forward to save him and they attacked me as well," he said.

"I have not forgiven them. My brother died for nothing. I want justice," he said.

A Sunni religious leader believed to have orchestrated the attack stood trial earlier this month, charged with assault and murder, which carries a jail term of up to 20 years.

But such attacks in the past have been met with lenient sentences.

Sunnis and Shiites agree on the fundamentals of Islam. Sunnis believe that Prophet Mohammed's closest aides were the rightful leaders of Islam while Shiites consider the prophet's cousin and son-in-law, Ali, as his divinely-appointed successor.

The real number of Shiites in Indonesia is unknown as many feel forced to practice in secret.

"Their beliefs are heretical. In Sampang, they go to villages to proselytise their deviant ideologies and convert our fellow Sunnis to Shiites," district chairman of the Indonesian Ulema Council (MUI) Buchori Maksum told AFP.

"They are the real provocateurs."

Munaji, 46, a village chief in Sampang, said that the Shiites were not welcome back in the community.

"The Shiites have caused a lot of unrest. We don't welcome them here unless they return to Sunni Islam," he said.

The MUI in East Java, a stronghold of Sunni Islam, issued a fatwa in January ruling Shiites religious "deviants", a move slammed as repressive by rights groups.

As the government mulls a solution, patience is wearing thin for the ostracized Shiites, hanging in limbo.

Iklil Al-Melal, 40, who represents the Shiites taking shelter at the tennis hall, said the group rejected the local government's suggestion of relocation. "On New Year's Day, we plan to go back to the village. We are prepared for the backlash. We have nothing to lose," he said.

"How can the government guarantee life is safer elsewhere?"

With no food and water, the Shiites have stopped bathing and have begun skipping meals. They pool whatever money they have to buy supplies.

Rohah, a 21-year-old housewife, sold her gold ring -- the only item she salvaged from her burnt home -- to chip in a modest $30. Others, she said, sold cows and goats.

"I've not showered for two days. I've no money to buy milk, so my baby has been drinking water instead," she said.

"I don't know what the future holds. All I know is that I will never change my faith. I pray that Sunnis will one day accept us."

{2:256} Let there be no compulsion In religion: Truth stands out Clear from Error(Sura Baqra:256)

Furthermore, in Sura Maida Allah (SWT) reminds us of what He had ordained the people of Book:

The differences could surely be solved through the dialogue on the table among the leaders of the Islamic sub-communities which further could result fruitfully into peace and harmony. This is exactly what Qura'an and the Prophetic Traditions (Sunnah) teach us.

So remeber always Peace and Harmony amongst the Mankind!

O sunni brothers of Indonesia, please do not make the tasks of Zionist Easier, please understand that they hate MUSLIMS irrespective of SHIA or SUNNI