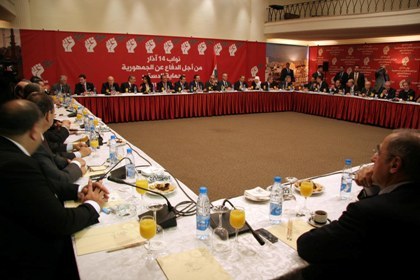 Speaker Nabih Berri has suggested that March 14 opposition lawmakers, many of whom have received death threats, reside at a hotel near parliament to attend the meetings of a parliamentary subcommittee after they said they were fearing for their lives.

March 14 MP Marwan Hamadeh, who held a telephone conversation with Berri, told As Safir daily published on Wednesday that the speaker suggested that the lawmakers reside at the hotel and hold the meetings in parliament after guaranteeing enough security protection to them.

“We insist on holding the parliamentary elections on time and on approving a new electoral draft-law,” he told As Safir.

According to An Nahar newspaper, a similar phone conversation was made between Berri and opposition MP Butros Harb to discuss the arrangements for reviving the work of the subcommittee tasked with reviewing the electoral system, and the size and number of districts.

Earlier in the month, the March 14 coalition said it made an exception by ending its boycott of the subcommittee but insisted on holding the meetings at the houses of opposition MPs, who have confined themselves to their homes and offices following death threats.

But their proposal reached a dead end when several officials from the March 8 majority coalition rejected it.

Following a meeting held between March 14 alliance leaders on Tuesday night, a high-ranking source told An Nahar that the opposition will continue to coordinate with Berri on ways to approve a new electoral law “despite attempts by some (parties) to annul the elections over fears from the results.”

The coalition's demands to change the government haven't changed, the source said, adding March 14 “insists on holding the elections on their constitutional time along with the discussion of a new electoral law.”

Lebanon plunged in a political crisis following the Oct. 19 assassination of Internal Security Forces Intelligence Bureau chief Wissam al-Hasan when March 14 boycotted the government and all parliamentary activity linked to it.

It also called for the cabinet's resignation and said only a salvation government could oversee the 2013 parliamentary polls.

saves on the explosives..lol.. only one building..

I thought the exact same thing. Quality explosives is now a rare thing in Hezbollah's arsenal... The unstable ones have been blowing up throughout the country in the past year, They're almost out of stock, re-ordering is tough because Bachar needs all of them for the Free Syrians.

It would be cheaper and much better for us if these low lives would be blown up instead of costing tax payers a fortune while they continue to screw us.

why dont you pay your electricity bills instead of worrying about taxpayer money - you dont even pay tax in the first place!

That's how you justify terrorism and murder? Blow them up is your solution because you feel you are being scrwed? kill them and anyone else in the vacinity that happens to be there is ok with you? all those lives lost is ok as long as you think you may get a bigger paycheck. Cowardly would be an understatement to describe you and anyone else who thinks like you.

if i am a hit with well hung guys.. why the hell are you following me around and go out of your way to comment on my posts...your little pecker doesn't come close to something that hangs in the first place.
and i just love your comebacks.. "u r correct about the ladies part." just like you still live in your parents basement.. now take your panties out of your A__

i hope they pay their rooms with their money not from the taxpayers one!!!!

doubt it.. this is Lebanon ya peace... the tax payers handle everything..

I have a much cheaper and safer solution... every March 14 lawmaker shall be picked up a Hizb-Amal-FPM MP and they shall ride in the same car... Fuel efficiency and no bombings... WIN-WIN

fabulous idea... cant wait to see Saad-Hariri and Geagea-Aoun start car polling.. lol.. but you are right.. at least they would know they are safe..

sorry .. saad-fadllalah... and cant be geagea.. so zahra and aoun... and its car pooling.

Guys, and this is very important, don't forget to tell Hezbollah's Mahmoud Hayek where you will be staying.

Since they all like to tweet, why don't they do a mega conference call each from his own house.

Fire Berri, enough of that Syrian snake. Find out who killed the top government internal security figure as the same mafia is capable to reach anyone.