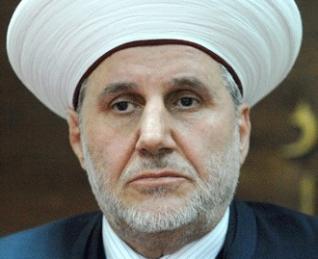 The Mufti of Tripoli and the north Sheikh Malek al-Shaar revealed on Wednesday details surrounding the alleged death threats he had received and which made him decide to prolong his stay in Europe.

In an interview on Future TV, al-Shaar said: “I have received several phone calls and I even met with army officers that advised me to be cautious as my movements are being watched”.

Meanwhile, Abdul Jalil Saeed, a cleric defected from the Dar al-Fatwa in Syria revealed in a taped interview that Ibrahim Hamad, a captain in the Syrian intelligence, has been collecting information about the northern Mufti.

"Hamad came to Beirut many times and met with several figures at the office of (Loyalty to Resistance) MP Nawwaf Moussawi,” Saeed said.

"I have been informed by people in the Syrian Dar al-Fatwa that he (Hamad) was going to personally supervise the assassination operation from the Bekaa region,” he added, explaining that al-Shaar was supposed to be targeted near the residence of the Bekaa Mufti Mohammed Khalil al-Mayss.

Saeed also said that two members of the Lebanese Dar al-Fatwa are involved in this assassination attempt.

"The operation was going to look like an accident involving alcohol or something similar to Sheikh Ahmed Abdul Wahed's assassination,” he explained.

On May 20, Abdul Wahed's vehicle was stopped at an army checkpoint in the northern region of Kweikhat where he was killed.

"What I have just heard makes me believe even more that these death threats are true,” al-Shaar commented, adding that “all assassinations in Lebanon started with rumors and fabricated stories, and the proof is al-Akhbar's (newspaper) latest stories about me”.

After al-Shaar announced that he had received death threats, al-Akhbar newspaper reported that the mufti was threatened because his son had sold non-existent properties in the Tripoli area of Ras al-Sakhr to members of Syrian President Bashar Assad's regime.

The Mufti denied the newspaper's reports during Wednesday's interview.

Sheikh al-Shaar announced in early December that he will not be returning to Lebanon from a trip to Europe after he has allegedly received death threats.

Radio Voice of Lebanon (93.3) said al-Shaar was attending a conference in Vienna and then left for Paris where he will reside until his return.

Syria is behind all past and current assasinations. The Hezz help them get it done. I am waiting for someone to challenge Nassy to publically say he was not involved so he can lie again to the public.

Stop talking out of your poop shoot as always Kaa Kaa Karim. Your truly a class idiot!

it s more than clear that we do ot need any more proof about hizbushaitan being involved in the ongoing killings.

At least you don't deny that your allies are behind the killings of these people....that's a good start for your kind.

damascene, i find it outrageous how all of a sudden the syrian regime is our allies, when in fact they were your allies for the entire time they were raping lebanon. Where were you FSA people then? Participating in the rape of lebanon! Hope ur army and FSA finish eachother of as when it came to lebanon, both of you participated in its destruction!!

Lies lies lies and more insults. You should be banned from writing on this educated news site.

kaka the faga still stuck in the past...

gabby right on the point :) and now you will see m8 insulting us for our comments :) btw, the truth is what it is.

the retarded zionist scum trash and filth, changing nicknames to appear and more than one person, is spreading propaganda hate and other stupidities

"Hamad came to Beirut many times and met with several figures at the office of (Loyalty to Resistance) MP Nawwaf Moussawi,” Saeed said.

no need to say more lol !

Phoenician, before Partition removal of their weapons and repayment of 30 years of non-payment of electricity for false "resistance". Plus interest.

@gabby11
They can shove their weapons where the sun never shines just as long as they keep them away from us or we get as much or more weapons than they have.
We don't want their money for the electricity they stole, just want to be rid of them and to live in peace among all those who believe like us in life not death and peace as a worth while values.
They can have the south and can continue to fight Israel till hell freezes over just do long as they keep us out of it.

@jabalamel
It's called free speech. Something alien to you and your likes I am sure and you find it hard to understand because it goes against the indoctrination your likes preach.
Here comes the standard mantra....

Ouf its not Israel again who is killing everyone? you mean Syria and Hizballah actualy kill people? no way but they are both very peaceful organizations just ask herr Clown!

When the regime in Syria falls....a lot of Syrians and Lebanese are going to be very surprised at the stuff that's going to come out about the past 48 years. What I will tell you is that the regime in Syria along with her puppets (HA, Pali Organizations, SSNP) in Lebanon are responsible for at least 80% of the assassinations and terrorist acts.

mowaten
your expected type of comments is not unusual.
all what you are saying are distortions of the truth. re read the article and hear the news and you will see that this is corroborated from security sources.
so whatever you try to say will not be accepted by any logical thinking person.
and now you will start with the low level answers :)

damascene, where were you and your fellow syrians when your regime and army where raping and killing lebanese? Why didnt you protest then? Why only now when your the ones being killed? Since when did you care about lebanon? I dont mind calling you a hypocrite because thats what you are. I think you forgot to add to that list: THE SYRIAN PEOPLE WHO DID NOTHING EXCEPT PARTICIPATE BY SENDING THEIR SONS TO OCCUPY LEBANON AND OBEYING THE SYRIAN REGIME THAT YOU ARE NOW AGAINST.

Damascen you are partially correct. The syrian regime did create a lot of chaos in lebanon directly or by using its puppets (who were plenty more than you mentioned, such as amal who most likely was their closest and longest lasting ally together with the SSNP. Heres the thing though, the syrian regime was allied at one point or the other with every organization in lebanon, including the kataeb and it pitted diffirent organizations against eachother based on which org it was allied with at that certain time. However it would be unjust to the victims of the lebanese civil war to put the blame only on the regime, as all those who participated including other regimes, share an equal blame and people were being killed left and right for reasons that not always had to do with the criminal hafez regime.

continuing from previous post- I am 100 % against bashar and his regime but if we forget the crimes of others than we will simply replace this dictator with a diffirent one. A real revolution must learn from past misstakes and not accept as an example someone who was allied with assad or his dad for all the years they comitted crimes only to have him become our next leader simply because he left bashar 1 year ago. We must never settle on anyone less than fully clean.

For me, everyone who worked with hafez or bashar to kill people (even if they later on became their worst enemies) is and remains a filthy murderer and if he really had repented then he would have admitted his misstakes and demanded to be put on a trial for the sake of the people he unjustly murdered but none of hafez or bashars allies have done that. Its sad how people forget about the crimes of murderers for whatever reason they have. Following the "enemey of my enemy is my friend" concept is failed and it only leads to destruction like the one we wanted to end.

Syriano- I could not agree more with your words. however, ask yourself this. did you feel the same way 2 years right when the revolution started or did those feelings surface when it was clear bashar was going down? I only ask because this is the first time i see you comment. again though, your words are pure gold.

mowaten??? I doubt. And you serve other countries and other nations!!! lli ikhtashou matou"

no, we serve one country and that country is lebanon

don t you have the very same reaction when alakhbar says something you say it is the truth LOL!!!

Instead of all getting upset about this lets just agree to blame it on Israel as its not worth fighting over. At least we dont have to show proof and its an acceptable norm to close out investigative reports in Lebanon.

why do you explain the zionist scum about unexploded mines, they put them there

Flamer- no is saying Isreal is not our enemy. all we are saying is we have more than one enemy. Not sure why that is so hard to understand. all we want is to be able to hold the actual perpetrator accountable and just because one enemy blames our other enemy and we don't accept, that does not mean that enemy is all of a sudden our friend. does that make sense or do I need to draw it our for you?

Some were killed by Israel, some by Syria. It's a known fact. How r we still arguing about this?

Syria did not do any better than Israel in Lebanon. U could say worse, since it's our "sister" country. I hope this can all just stop one day.
I

that is why seeing people etill supporting this regime mean they are ok with all the horrors they did in lebanon...
as israel and syria hurt lebanon but they "resist" against israel and collaborate with syria lol ! both countries are enemies of lebanon but not for M8ers who still lick the boots of the baath regime and are proud of it!!!!! just see how much they defend bashar here !

"both countries are enemies of lebanon."
In 2012 Israel is only an enemy of Lebanon because in the 1980's the then Lebanese Government, at the demand of their Syrian masters, tore up the peace treaty worked out with Israel.
If your Government spoke to Israel now, they would find that they have a great deal more in common than what separates them. You'll never know until you try it.

yes indeed philippo but if you make peace with israel then hezbi lose all the marketing slogans and disappear! and if there is peace then hezbis would be unemployed, haram....