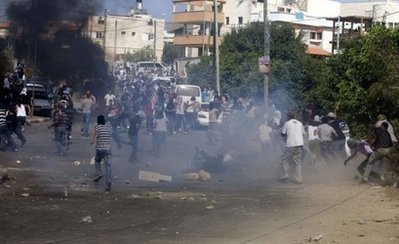 Israeli police and stone-throwing Arabs clashed in northern Israel on Wednesday as a group of extreme right-wing Israelis tried to march through the Arab Israeli town of Umm al-Fahm.

Hundreds of police clad in riot gear fired tear gas and stun grenades to disperse angry Arab youths, many with scarves wrapped around their faces, who burned tires and hurled stones in protest ahead of an extremist rally in their town.

Tensions were high as around 20 Israeli demonstrators from a group called "Our Land of Israel" turned up for a march calling for a ban on the radical wing of the Israeli Islamic Movement, which is led by preacher Sheikh Raed Salah.

"Death to terrorists!" they shouted, waving banners reading: "Make the Islamic Movement illegal," and "Death to Raed Salah," although they were prevented from marching by police who hemmed them in with three coaches, an Agence France Presse correspondent at the scene said.

Hanin Zuabi, a deputy with the left-wing Arab nationalist party Balad, sustained injuries to her back and neck after being hit by a stun grenade, party leader Jamal Zakhalka said.

MP Afu Agbaria, who is a member of the communist Hadash party, was also taken to hospital after a tear gas canister slammed into his leg, an AFP correspondent said.

The controversial march roughly coincides with the 20th anniversary of the assassination of Rabbi Meir Kahane, a right-wing extremist who routinely referred to Arabs as "dogs" and called for their expulsion from Israel.

"The Islamic Movement is part of the international Islamic jihad," said MP Michael Ben Ari, who accused it of having ties to the Palestinian militant groups Hamas and Islamic Jihad.

Ahead of the march, Arab municipal officials and dozens of counter-protesters waving Palestinian flags gathered in the town, AFP correspondents said, as police deployed in force to prevent clashes.

"Free Palestine!" residents shouted as they waved Palestinian flags from the rooftops. "With our blood, with our souls, we sacrifice for you, Palestine!"

Israeli police spokesman Mickey Rosenfeld said several hundred police, including undercover units, were deployed in and around the town to prevent clashes.

"We have deployed large numbers in the vicinity of Umm al-Fahm and mobilized special units to maintain calm during a demonstration by Jewish activists," he told AFP ahead of the march, which was given the green light by Israel's supreme court.

Agbaria, an MP from the communist Hadash party, said the march was "provocation against the people of Umm al-Fahm and the Arab minority."

"They are attacking the legitimacy of the Arab presence in the country in coordination with the right-wing extremists in the government."

Others were more blunt.

"We will not allow them to enter Umm al-Fahm. If they pass, it will be over our dead bodies," Ahmed Buwerat, 75, said ahead of the march.

"We have Jews come here every day to visit the market and drink coffee, and they are welcome," he said. "But these demonstrators are fascists and racists and Nazis."

Kahane, an American-born rabbi and political leader, was shot dead by an Arab gunman in Manhattan in November 1990, and his Kach movement was outlawed by Israel in 1994 for inciting racism.

Earlier this month Prime Minister Benjamin Netanyahu lent his support for a bill that would require all new citizens to swear allegiance to Israel as a "Jewish and democratic state."

Arab citizens, who make up 20 percent of the population, have called the bill racist and said it aims to delegitimize their presence.

Israel's 1.3 million Arab citizens are Palestinians who remained in the country following the creation of the Jewish state in 1948, along with their descendants.(AFP)