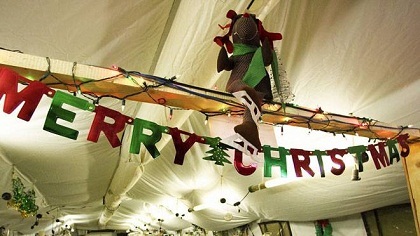 Several Kuwaiti liberal civil societies have condemned calls from some organizations and individuals forbidding the celebration of Christmas in the oil-rich Gulf state, a report said Sunday.

The civil societies said in a statement published by Al-Jarida newspaper that every year at this time certain groups declare celebrating Christmas and New Year as forbidden from an Islamic point of view.

"Because such actions represent an insult to Christianity and Christians ... we strongly reject the publication of such calls," a statement signed by nine liberal groups said, adding that such calls were an act of hatred criminalized under the international law.

The statement did not say who issued the calls, but usually some radical religious individuals and small groups issue fatwas (religious edict) forbidding Christmas celebrations.

However, the mainstream Islamic organizations do not issue such calls.

There are no government restrictions on religious or social celebrations of Christmas or New Year in the conservative emirate, but social parties on any occasion must abide by strict regulations.

Kuwait has about a dozen churches which all freely mark Christmas especially in the main church complex in the heart of the capital Kuwait City.

There are some 200 Christians -- mainly of Iraqi or Palestinian origin -- among the 1.2 million native population of Kuwait.

But the emirate is home to 642,000 foreign Christians, or 17 percent of Kuwait's population of 3.8 million, mostly from India, the Philippines, Egypt, Lebanon and the West.