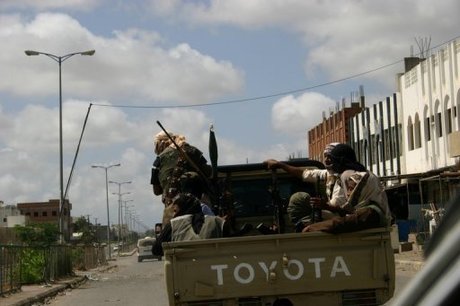 A security official identified one of the militants killed as Abdullah Hussein al-Waeli, an al-Qaida member from Marib province who was wanted after he escaped from prison two years ago. No details were given on the Jordanian.

Tribal sources said three other militants were wounded in the attack.

The official, who requested anonymity, said the missiles were fired by "an American drone," and that the attack took place in the center of Shehr, a town east of the provincial capital Mukalla.

Al-Qaida had declared an Islamic emirate in nearby Radaa earlier this year, shortly before being driven out by tribal militiamen.

Tareq al-Dahab, who led the al-Qaida fighters in the January raid on the town, was shot dead in February.

Dahab was a brother-in-law of slain U.S.-born cleric Anwar al-Awlaqi, who was killed in a suspected US drone strike in September.

U.S. drones have backed Yemeni forces combating militants of al-Qaida in the Arabian Peninsula, the group's Yemen branch, considered by Washington to be the most active and deadliest franchise of the global jihadist network.

AQAP took advantage of the weakness of Yemen's central government during an uprising last year against now ousted president Ali Abdullah Saleh, seizing large swathes of territory across the south.

But after a month-long offensive launched in May by Yemeni troops, most militants fled to the more lawless desert regions of the east.