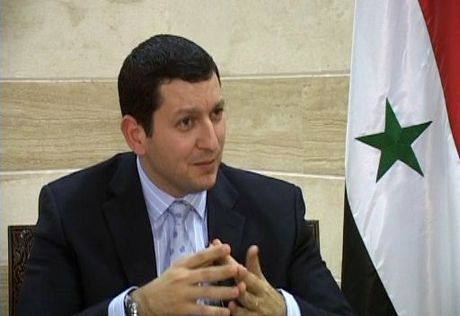 U.S. intelligence officials helped Syrian foreign ministry spokesman Jihad Makdissi to flee to Washington earlier this month, The Guardian has reported, after media reports said he had been residing in Lebanon since he left Syria around a month ago.

“Makdissi is cooperating with U.S. intelligence officials who helped him flee to Washington almost one month ago,” The Guardian said.

“Makdissi became one of the most prominent regime defectors in late November when he left Beirut after first crossing from Syria. The Guardian reported at the time that he had fled for the U.S., possibly in return for asylum. This has now been confirmed,” The Guardian added in its new report.

"Details of Makdissi's journey to the U.S. are not yet known, although Britain has previously denied that he arrived in the UK after fleeing Beirut," the British newspaper said.

"Lebanese officials had previously suggested he was either staying with his family in a Christian area near Beirut or had been captured and returned to Syria," it added.

The newspaper said the alleged development comes after almost a month of debriefings, “which have helped intelligence officials build a picture of decision-making in the inner sanctum of the embattled regime.”

Syrian officials have denied that Makdissi has defected, saying he had instead taken three months of administrative leave. However, at the time of his departure, the pro-regime television al-Manar said “Makdissi has been relieved of his duties for voicing stances that do not conform to Syria's official rhetoric."

Al-Mayadeen, another Beirut-based pro-Syria television, also reported that Maqdessi had defected. Lebanon's al-Jadeed television said "Maqdessi left for London via the Beirut airport after tensions in his relation with the Syrian regime."

The Guardian said the U.S. State Department did not respond immediately to its requests for comment, and the CIA was “unwilling to discuss the story.”

On Saturday, OTV reported that the Syrian official was residing in Lebanon and has not formally defected from the Syrian regime.

It said there is no restriction on Makdissi's movement in Beirut.

On December 3, the Syrian Observatory for Human Rights said the spokesman had been "pressured by people inside the presidential palace, but not the president himself, to resign" and had traveled to London with his family.

However, in the first reaction from Damascus regarding the information that surfaced about a possible defection by the longtime loyalist to President Bashar Assad, Syrian pro-government daily al-Watan said on December 11 that Makdissi has taken sanctioned leave for three months.

A native Arabic speaker and fluent in French and English, Makdissi conducted his thesis in London while working for the Syrian embassy.

I can confirm for Naharnet and it's readers that Mr Makdassi is in Lebanon and resides with is family in a Christian area. He also has no intentions of seeking asylum in the U.S...thank you & best regards.

I noticed there's a nice atmosphere on naharnet since Christmas. Lets keep it this way everyone. Hope you had good presents.

Gracias, Christmas is almost over but the spirit remains. Happy holidays to you tambien.

The CIA commenced the first military coup in Syria. Once upon a time Syria was a democracy and in fact had a christian Prime minister!, but people like Kissinger had different ideas for Syria and the Arabs. All these dictatorships were propped by the US for israel's eyes. The US is no friend of the syrian people, the US simply sides with the winners.

this also applies to bashar assad. There are minor disagreements with the US but strategicaly the americans were okay with him. Two months after the demonstrations broke out in dar3a Clinton described bashar as a 'reformer'. It took 7 months for obama to tell bashar he should step down (when it became clear to the americans that the revolution will only grow). When hafez died, US secretary of state madlene albright attended his funeral and had a meeting with bashar where she told him they wanted a 'smooth transition' (please review the official record). The only reason the US officialy abandoned assad (and their boy mubarak, and suharto of indonesia before them) is again because they simply switch sides and side with the winners. They will later try to iron the outcome to fit their policies.

here's our problem as Arabs, we never take responsibility for our actions!! we'd rather blame everything on the U.S and Kissinger( who has his plan published in a book for all to see and learn from). the fact is that we are power hungry. the middle east ( Arabs (Muslims and christian) and Persians have been at war for over a 1000 years well before the Zionist movement was formed! Muslims and Christians were always fighting for power around the holly land! the only reason why Syria had a christian pm was because it was french colony and the french wanted Christians in power in Lebanon and Syria! until we take responsibility for our actions and decisions, the middle east won't improve.

sorry this was meant for a reply to realist i don't know why it showed up under you comment al-kafi.

seems to me that Assad regime loves kissinger tactics especially divide and conquer! they use it all the time in Lebanon. they assassinate bashir which divided the christians. they assassinate hariri senior and if they can take out his son, no more powerfull sunni leader and thus division. lastly their propaganda is now making half of Lebanon denounce the residents of Tripoli as all Salafists when it is only a minority a couple of neighborhoods. if tripoli was all salafists then all the mp's from tripoli would have been salafists!!!

Why didn't the supreme Hezz detect the CIA? What else don't they know?

Jajajajajaja. You're a funny person Mowaten. Hope you enjoyed the Christmas cake ;)

you forget that up to now most Israeli spies in Lebanon were Hezbollah members. obviously cause they can get inside information! no loyalty no ideology. just pure mafia type greed!