U.N.: War in Syria Desperate with Worse to Come 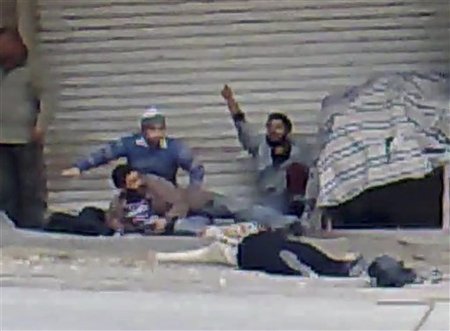 The United Nations warned Tuesday that Syrians are "losing hope" as war worsens in their country, with prospects of a diplomatic end now at rock bottom, and international aid is cut.

Peace envoy Lakhdar Brahimi's latest talks with Syria's President Bashar Assad produced no sign of a willingness to negotiate, diplomats said, and there are mounting warnings of a sectarian war taking over the uprising against Assad.

The United Nations has had to cut food rations it provides to 1.5 million Syrians because of cash shortages, and John Ging, a top U.N. relief official, said: "The humanitarian community in Syria is struggling."

With four million people in need inside the country and well over 500,000 registered as refugees outside, "it's becoming more and more difficult just to do the very basic things to help people to survive," said Ging, director of operations for the U.N.'s Office for the Coordination of Humanitarian Affairs.

With existing appeals already barely 50 percent funded, the U.N. has launched its biggest ever drive to raise $1.5 billion for next year.

With the death toll now estimated at more than 44,000 by Syrian activists and another grim winter setting in, hopes of a diplomatic solution to the conflict are virtually non-existent.

"We do not see any prospect of any end of violence or any prospect of political dialogue to start," UN leader Ban Ki-moon said ahead of Brahimi's latest trip to Damascus this week which produced little sign of a change of heart.

"Assad appears to have stonewalled Brahimi again, the U.N. Security Council is not even close to showing the envoy the kind of support he needs and the rebels will not now compromise," said a UN council diplomat.

Russia and China have vetoed three attempted Security Council resolutions seeking to force Assad's hand with just a threat of sanctions. Western nations say there is now no point in coming back on the UN path.

Ban is now leading growing U.N. warnings that the change in the 21-month-old conflict could see "sectarian atrocities".

"There is a growing risk that civilian communities, including Alawite and other minorities perceived to be associated with the government, its security forces, militias and allies, could be subject to large scale reprisal attacks," said Adama Dieng, the U.N. special representative on the prevention of genocide.

Brahimi "has struggled to find a way to bring the regime and rebels together," according to Richard Gowan of New York University's Center on International Cooperation.

Gowan says however that Brahimi will have to draw up plans for a number of Plan Bs.

The "unlikely best-case scenario" is that Assad accepts defeat and the U.N. envoy has to negotiate his departure, said Gowan. The U.N. already has contingency plans for a peacekeeping force to be sent if this happens.

"If, as seems likelier, Assad and his circle fight to the death," Brahimi's second option is to urge the rebels to show restraint in victory and quickly organize aid and political talks as he did with Afghanistan after 2001, said Gowan.

"The final option involves the 'Somalia scenario,'" he added.

"If there is a general collapse, his priorities will be to get all factions to accept humanitarian aid, while minimizing the risk of chemical weapons use and creating back-channel mechanisms for talks on an eventual peace deal."

"The more contingency plans he has ready, the better," said Gowan.