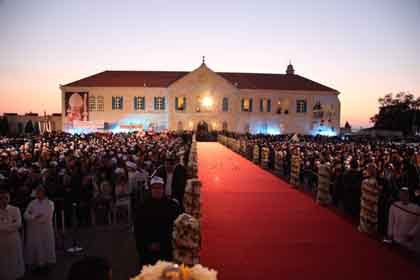 A joint committee of Maronite bishops and representatives of Christian parties began setting the stage for a large-scale meeting that will bring together the country’s four top Christian leaders and their Maronite lawmakers next month, reported al-Joumhouria daily on Tuesday.

According to the newspaper, Maronite Patriarch Beshara al-Rahi has set June 2 as a preliminary date for the summit. Invitations haven’t yet been sent pending al-Rahi’s return from the Vatican on Thursday.

Al-Joumhouria said that the meeting will be the first step to implement the agreements reached during the summit in Bkirki between Phalange party leader Amin Gemayel, the chief of the Lebanese Forces Samir Geagea, Free Patriotic Movement leader Michel Aoun and Marada chief Suleiman Franjieh last month.

During that meeting, the participants agreed to hold additional meetings “whenever the need arises.”

Informed sources told the daily that the conferees would discuss the Christian presence in the Lebanese state and the achievements made by organizations to consolidate the role of Christians in ministries and state institutions.

The agenda of the talks would also include the issue of ownership of land by foreigners and demographic changes in the country.