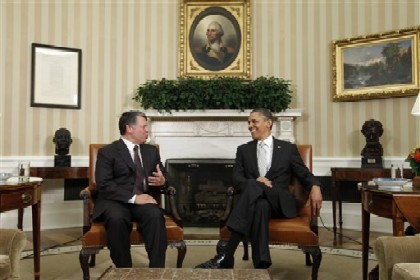 U.S. President Barack Obama warned Tuesday that political turmoil battering the Middle East made it "more vital than ever" that Israel and the Palestinians get back to the negotiating table.

Despite a mood of deep pessimism surrounding Obama's peace drive, in Israel, in Washington and in the Palestinian territories, the president said during a meeting with Jordan's King Abdullah II that frozen talks must be revived.

"Despite the many changes, or maybe because of the many changes that have been taking place in the region, it's more vital than ever that both Israelis and Palestinians find a way to get back to the table," Obama said.

Talks, broken off last year because of a row over Jewish settlement building, should "begin negotiating a process whereby they can create two states living side by side in peace and security," Obama said.

The king thanked Obama for his support for "the core issue of the Middle East, which is the Israeli-Palestinian peace," and promised to move "aggressively" on domestic reform in Jordan.

While Jordan has not seen regime altering protests like Egypt and Tunisia, there have been demonstrations in Amman and some violent clashes, amid rising popular discontent and demands for reform.

A government-sponsored reform effort has slowed while Islamists and other groups have demanded an electoral law that would lead to a parliamentary government and elected prime minister rather than one appointed by the king.

But Obama welcomed the king's reform effort and said he was confident that Jordan's security, stability and economic prosperity as well as its people would benefit "to the extent that he's able to move these reforms forward."

The meeting with the king came at the start of a week of intense U.S. Middle East diplomacy, which includes a visit to Washington by Israeli Prime Minister Benjamin Netanyahu and Obama's speech on the "Arab Spring" on Thursday.

Almost as soon as taking office in January 2009, Obama made clear that forging Middle East peace and a Palestinian state would be a high diplomatic priority on his watch, and one on which he would wager political capital.

But more than two years later, the situation seems direr than when he took office. Direct talks between the Israelis and Palestinians, painstakingly brokered by Washington, collapsed last year in a row over settlements.

And the lack of direction and general malaise seemed to be summed up by the resignation of Obama's Middle East envoy George Mitchell last week.

The situation took another dire turn on Sunday as 14 people were killed as Israeli troops shot at thousands of Palestinian demonstrators seeking to cross its borders, and blamed Syria and Lebanon for the incursions.

The clashes erupted as Palestinians marked the anniversary of Israel's founding in 1948.

White House spokesman Jay Carney argued that despite apparently dim prospects for peace talks, the Arab uprisings offered a "window of opportunity" for regional change and a moment for Israelis and Palestinians to reengage.

"We need to move forward with that process -- the circumstances are difficult and they are not likely to magically resolve themselves, so the parties need to sit down and negotiate and move forward on a peace process that reaches a resolution, a two-state solution that we obviously support strongly."

Obama has had a rocky relationship with Netanyahu, whom he will meet Friday, and seen his credibility with the Palestinians recede, and now few observers of the Middle East see any chance for progress.

U.S. officials seem privately despondent, both at Netanyahu's unwillingness to make concessions to the Palestinians, and at a Palestinian unity deal between Fatah and Hamas that has further hardened the Israeli line.

Obama and Netanyahu will both be seeking a way out of a looming crisis as the Palestinians threaten a unilateral declaration of statehood at the United Nations General Assembly in September.

Palestinian leader Mahmoud Abbas said Tuesday that the bid for international recognition was not a "stunt" and would contribute to achieving peace with Israel.

"Our quest for recognition as a state should not be seen as a stunt; too many of our men and women have been lost for us to engage in such political theater," Abbas wrote in an opinion piece for the New York Times.